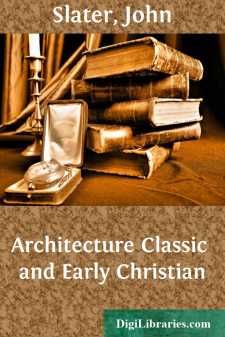 This handbook is intended to give such an outline of the Architecture of the Ancient World, and of that of Christendom down to the period of the Crusades, as, without attempting to supply the minute information required by the professional student, may give a general idea of the works of the great building nations of Antiquity and the Early Christian times. Its chief object has been to place information on the subject within the reach of those persons of literary or artistic education who desire to become in some degree acquainted with Architecture. All technicalities which could be dispensed with have been accordingly excluded; and when it has been unavoidable that a technical word or phrase should occur, an explanation has been added either in the text or in the glossary; but as this volume and the companion one on Gothic and Renaissance Architecture are, in effect, two divisions of the same work, it has not been thought necessary to repeat in the glossary given with this part the words explained in that prefixed to the other.

In treating so very wide a field, it has been felt that the chief prominence should be given to that great sequence of architectural styles which form the links of a chain connecting the architecture of modern Europe with the earliest specimens of the art. Egypt, Assyria, and Persia combined to furnish the foundation upon which the splendid architecture of the Greeks was based. Roman architecture was founded on Greek models with the addition of Etruscan construction, and was for a time universally prevalent. The break-up of the Roman Empire was followed by the appearance of the Basilican, the Byzantine, and the Romanesque phases of Christian art; and, later on, by the Saracenic. These are the styles on which all mediæval and modern European architecture has been based, and these accordingly have furnished the subjects to which the reader’s attention is chiefly directed. Such styles as those of India, China and Japan, which lie quite outside this series, are noticed much more briefly; and some matters—such, for example, as prehistoric architecture—which in a larger treatise it would have been desirable to include, have been entirely left out for want of room.

In treating each style the object has not been to mention every phase of its development, still less every building, but rather to describe the more prominent buildings with some approach to completeness. It is true that much is left unnoticed, for which the student who wishes to pursue the subject further will have to refer to the writings specially devoted to the period or country. But it has been possible to describe a considerable number of typical examples, and to do so in such a manner as, it is hoped, may make some impression on the reader’s mind. Had notices of a much greater number of buildings been compressed into the same space, each must have been so condensed that the volume, though useful as a catalogue for reference, would have, in all probability, become uninteresting, and consequently unserviceable to the class of readers for whom it is intended.

As far as possible mere matters of opinion have been excluded from this handbook. A few of the topics which it has been necessary to approach are subjects on which high authorities still more or less disagree, and it has been impossible to avoid these in every instance; but, as far as practicable, controverted points have been left untouched. Controversy is unsuited to the province of such a manual as this, in which it is quite sufficient for the authors to deal with the ascertained facts of the history which they have to unfold.

It is not proposed here to refer to the authorities for the various statements made in these pages, but to this rule it is impossible to avoid making one exception. The writers feel bound to acknowledge how much they, in common with all students of the art, are indebted to the patient research, the profound learning, and the admirable skill in marshalling facts displayed by Mr. Fergusson in his various writings....