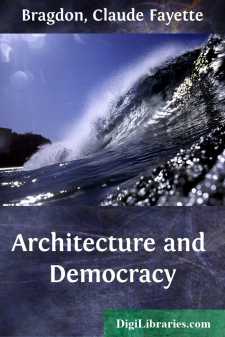 I BEFORE THE WAR

The world war represents not the triumph, but the birth of democracy. The true ideal of democracy—the rule of a people by the demos, or group soul—is a thing unrealized. How then is it possible to consider or discuss an architecture of democracy—the shadow of a shade? It is not possible to do so with any degree of finality, but by an intention of consciousness upon this juxtaposition of ideas—architecture and democracy—signs of the times may yield new meanings, relations may emerge between things apparently unrelated, and the future, always existent in every present moment, may be evoked by that strange magic which resides in the human mind.

Architecture, at its worst as at its best, reflects always a true image of the thing that produced it; a building is revealing even though it is false, just as the face of a liar tells the thing his words endeavor to conceal. This being so, let us make such architecture as is ours declare to us our true estate.

The architecture of the United States, from the period of the Civil War, up to the beginning of the present crisis, everywhere reflects a struggle to be free of a vicious and depraved form of feudalism, grown strong under the very ægis of democracy. The qualities that made feudalism endeared and enduring; qualities written in beauty on the cathedral cities of mediaeval Europe—faith, worship, loyalty, magnanimity—were either vanished or banished from this pseudo-democratic, aridly scientific feudalism, leaving an inheritance of strife and tyranny—a strife grown mean, a tyranny grown prudent, but full of sinister power the weight of which we have by no means ceased to feel.

Power, strangely mingled with timidity; ingenuity, frequently misdirected; ugliness, the result of a false ideal of beauty—these in general characterize the architecture of our immediate past; an architecture "without ancestry or hope of posterity," an architecture devoid of coherence or conviction; willing to lie, willing to steal. What impression such a city as Chicago or Pittsburgh might have made upon some denizen of those cathedral-crowned feudal cities of the past we do not know. He would certainly have been amazed at its giant energy, and probably revolted at its grimy dreariness. We are wont to pity the mediaeval man for the dirt he lived in, even while smoke greys our sky and dirt permeates the very air we breathe: we think of castles as grim and cathedrals as dim, but they were beautiful and gay with color compared with the grim, dim canyons of our city streets.

Lafcadio Hearn, in A Conservative, has sketched for us, with a sympathy truly clairvoyant, the impression made by the cities of the West upon the consciousness of a young Japanese samurai educated under a feudalism not unlike that of the Middle Ages, wherein was worship, reverence, poetry, loyalty—however strangely compounded with the more sinister products of the feudal state.

Larger than all anticipation the West appeared to him,—a world of giants; and that which depresses even the boldest Occidental who finds himself, without means or friends, alone in a great city, must often have depressed the Oriental exile: that vague uneasiness aroused by the sense of being invisible to hurrying millions; by the ceaseless roar of traffic drowning voices; by monstrosities of architecture without a soul; by the dynamic display of wealth forcing mind and hand, as mere cheap machinery, to the uttermost limits of the possible....