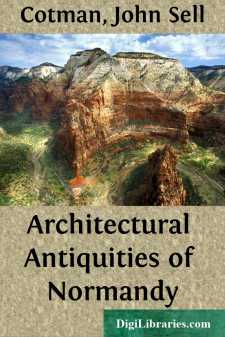 An artist, engaged in the illustration of the Architectural Antiquities of England, could scarcely do otherwise than often cast a wistful look towards the opposite shores of Normandy; and such would particularly be the case, if, like Mr. Cotman, to a strong attachment to his profession and the subject, he should chance to add a residence in Norfolk. This portion of the kingdom of the East-Angles, in its language and in its customs, but especially in the remains of its ancient ecclesiastical architecture, abounds in vestiges of its Teutonic colonists. The richly ornamented door-ways of its village churches have, in particular, long been the theme of admiration among antiquaries. Bred up in the midst of these, and warmly partaking in the admiration of them, Mr. Cotman devoted his pencil and his graver to the diffusion of their fame. Common report, aided by the suffrages of the learned, and in some degree by locality, designated them as Saxon: at the same time, when they were compared with what is left in Britain, of workmanship avowedly Norman, the points of dissimilarity appeared trifling or altogether vanished. Was it then to be inferred that, between Norman and Saxon architecture, there was really no difference; and, carrying the inference one step farther, that the hordes of barbarians denominated by these different appellations, although they might not have embarked at the same port, were only cognate tribes of one common origin, if not in reality the same? The solution of the first of these questions, the only one immediately in view, seemed best to be sought in that province of France, where the Norman power had been most permanently established, and where it was therefore reasonably to be expected, that genuine productions of Norman art might, if any where, be found. With this view, Mr. Cotman crossed the channel; and the result of three successive journies, in the years 1817, 1818, and 1820, is here submitted to the public.

Those who find pleasure in inquiries of this description, will join in the regret, that an undertaking like the present was so long delayed. Incalculable had been the advantages, had it but commenced previously to the period of the French revolution. That fearful storm burst with tremendous violence upon the castles of barons, the palaces of kings, and the temples of religion. Many of the most sumptuous edifices, which had mocked the hand of time, and had been respected amidst the ravages of foreign or domestic warfare, were then swept from the face of the earth. Others, degraded, deserted, neglected, and dilapidated, are at this moment hastening fast to their decay. Yet no small portion of what is valuable has been happily left. The two royal abbeys of Caen, though shorn of much of their former grandeur, are still nearly entire. Château Gaillard, the pride of Richard's lion heart, and the noble castles of Arques and of Falaise, retain sufficient of their ancient magnificence, to testify what they must have been in the days of their splendor: the towns and châteaus, which were the cradles of the Harcourts, Vernons, Tancarvilles, Gurneys, Bruces, Bohuns, Grenvilles, St. Johns, and many others of the most illustrious English families, are still in existence; and, of more modern date, when the British Edwards and Henrys resumed the Norman sceptre, numerous buildings of the highest beauty are every where to be met with. In his researches after these, Mr. Cotman had the advantage of being assisted by the kindness of three of the most distinguished antiquaries of the present day, M. le Prevost, M. Rondeau, and M. de Gerville, but particularly by the last, whose friendly help has likewise extended towards the preparing of the letter-press for many of the articles from the western part of the province. It were ungrateful not to acknowledge the assistance derived from Mr. Cohen, in the same department. The value of his aid, which has been most freely contributed, can be duly appreciated by those alone who have had opportunities of judging of the accuracy and extent of his knowledge.

In the selection of subjects for engraving, attention has been principally paid to two points, excellence in the objects themselves, and certainty as to dates; but the greatest stress has been laid upon the latter. The author of a work which professes to be in any degree didactic, can never impress too strongly upon his mind the value of the Roman precept, “prodesse quàm delectare;” and an artist, accustomed by his habits to the contemplation of the beautiful and the picturesque, requires above all men to be warned on this head. Many of the buildings here represented, might easily have been exchanged for others, more perfect, more elegant, or more ornamented; but it is hoped that they could not have been exchanged for those that would have been more instructive. The main object of the publication has been to exhibit a series of specimens of Norman architecture, as they actually exist in Normandy itself; and, by taking those whose dates are best defined, to enable the antiquary and the amateur of other countries, not only to know the state of this extraordinary people, as to their arts, at the epoch of their greatest glory, but also to compare what is in Normandy with what they find at home....