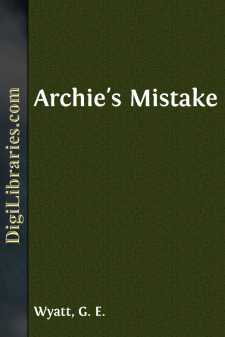 "Father, why do you have such a beggarly-looking hand at the mill as that young Bennett?" asked Archie Fairfax of the great mill-owner of Longcross.

"Why shouldn't I?" he replied. "He comes with an excellent character from the foreman he has been under at Morfield. He does his work very well, Munster says, and that's all I care for. I don't pay for his clothes."

Archie said no more, but he still felt aggrieved. As a rule, his father's work-people were a superior, tidy-looking set, but this new lad was literally in rags, and his worn, haggard face and great, hungry-looking eyes seemed, in Archie's mind, to bring discredit on the cotton-mill.

"He's no business here," he said to himself.—"I wish you'd send him away."

Archie had only lately had anything to do with the mill, as he had been at a large public school. But now he was eighteen, and had left school. He had come into his father's office as secretary, that he might learn a little about the business which was to be his some day.

Mr. Fairfax had some excuse for the pride he took in his manufactory, for a better looked after, better managed, or more prosperous one it would have been difficult to find, though of course there were some rough people among the workers. Long experience had taught his work-people to respect and trust an employer who acted justly and honourably in every transaction; and it was Mr. Fairfax's boast that there had never yet been a "strike" among his men, nor any difficulty about work or wages which had not been settled at last in a friendly spirit.

But this very "superiority" was a snare to the mill-hands. For if they once took a dislike to any one who had been "taken on," they left him no peace until they got rid of him. It was looked on as a sort of privilege in Longcross to belong to the Fairfax mills, and the men chose to be very particular as to whom they would admit among themselves.

They all disapproved of poor Stephen Bennett from the first day of his coming.

As they walked away that evening they discussed his appearance with eager disapprobation.

"Who is he?" "Where does he come from?" "Where's he living?" "What's made the master take such a ragamuffin on?"

These were some of the questions asked, but no one was able to answer them.

"I'll get it all out of him to-morrow," said Simon Bond, a big savage-looking lad, with his hat on one side, and his pipe in his mouth.

"P'raps he won't be quite so ready to tell as you are to ask," said some one else.

"He'd better be, then, if he's got any care for his skin," answered the boy, and the others laughed.

So the next day Simon followed the stranger out of the mill, and began his questions in a rude, hectoring voice.

To his utter astonishment, Stephen refused to answer them. He made no reply while Simon poured out his questions, until the latter said,—

"Yes, I hear you," responded Stephen, looking at him with a half-frightened, half-defiant expression.

"Then why don't you answer?" he inquired with an oath....