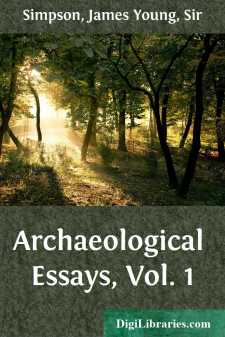 The late Sir James Simpson, in the midst of his anxious professional labours, was wont to seek for refreshment in the pursuit of subjects of a historical and archæological character, and to publish the results in the Transactions of different Societies and in scientific journals.

Some of these papers are now scarce, and difficult of access; and a desire having been expressed in various quarters for their appearance in a collected and permanent form, I was consulted on the subject by Sir Walter Simpson, who put into my hands copies of the various essays, with notes on some of them by his father, which seemed to indicate that he himself had contemplated their republication.

Having for a long time been acquainted with their merits, I did not hesitate to express a strong opinion in favour of their publication; and I accepted with pleasure the duty of editing them, which Sir Walter requested me to perform.

The papers in question were the fruit of inquiries begun indeed as a relief from weightier cares; but as it was not in their author's nature to rest satisfied with desultory and superficial results in his treatment of any subject, so his archæological papers more resemble the exhaustive treatises of a leisurely student, than the occasional efforts of one overwhelmed in professional occupations.

In the present work will be found all the more important archæological papers of Sir James Simpson, collected from the various sources indicated in the Table of Contents.

The subjects to the antiquities of which Sir James first directed his attention were connected with his own profession; but, as time went on, his interest in historical pursuits deepened and expanded, and the questions discussed by him became more varied.

It has been thought best to arrange the papers of a general historical scope in the first volume, and those connected with professional antiquities in the second; but readers, who may wish to trace the order in which they were written by the author, will find their various dates in the Table.

The first paper, entitled "Archæology, its Past and its Future Work," was prepared as a lecture to the Society of Antiquaries of Scotland. This was done with a care and elaboration which are not always associated with such efforts; and, whether in indicating the object and end of the archæological student's pursuits,—sketching the past progress of the study,—and specifying the lines of research from which Scottish inductive archæology may be expected to derive additional data and facts,—nothing more thoroughly practical could be desired; while in his resumé of the difficulties and enigmas peculiar to Scottish antiquities, he may be said to have left none of them untouched, his passing allusions being, in many instances, suggestive of their solution.

The paper on "An old Stone-roofed Cell or Oratory in the Island of Inchcolm" affords an instance of the author's careful observation, and his fertility of illustration. The humble structure in question, which, at the time when it first attracted Sir James Simpson's notice, was used as a pig-stye, had few external features to suggest the necessity of farther inquiry; but after his eye had become accustomed to the architecture of the early monastic cells in Ireland, its real character flashed upon him, and he found that his conclusions coincided with the facts of the early history of the island....