Aratra Pentelici, Seven Lectures on the Elements of Sculpture Given before the University of Oxford in Michaelmas Term, 1870 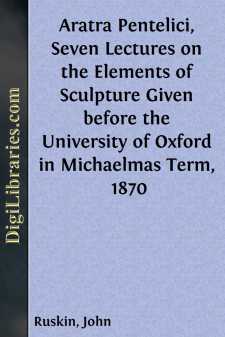 1. I must pray the readers of the following Lectures to remember that the duty at present laid on me at Oxford is of an exceptionally complex character. Directly, it is to awaken the interest of my pupils in a study which they have hitherto found unattractive, and imagined to be useless; but more imperatively, it is to define the principles by which the study itself should be guided; and to vindicate their security against the doubts with which frequent discussion has lately incumbered a subject which all think themselves competent to discuss. The possibility of such vindication is, of course, implied in the original consent of the Universities to the establishment of Art Professorships. Nothing can be made an element of education of which it is impossible to determine whether it is ill done or well; and the clear assertion that there is a canon law in formative Art is, at this time, a more important function of each University than the instruction of its younger members in any branch of practical skill. It matters comparatively little whether few or many of our students learn to draw; but it matters much that all who learn should be taught with accuracy. And the number who may be justifiably advised to give any part of the time they spend at college to the study of painting or sculpture ought to depend, and finally must depend, on their being certified that painting and sculpture, no less than language, or than reasoning, have grammar and method,—that they permit a recognizable distinction between scholarship and ignorance, and enforce a constant distinction between Right and Wrong.

2. This opening course of Lectures on Sculpture is therefore restricted to the statement, not only of first principles, but of those which were illustrated by the practice of one school, and by that practice in its simplest branch, the analysis of which could be certified by easily accessible examples, and aided by the indisputable evidence of photography.

The exclusion of the terminal Lecture of the course from the series now published, is in order to mark more definitely this limitation of my subject; but in other respects the Lectures have been amplified in arranging them for the press, and the portions of them trusted at the time to extempore delivery (not through indolence, but because explanations of detail are always most intelligible when most familiar) have been in substance to the best of my power set down, and in what I said too imperfectly, completed.

3. In one essential particular I have felt it necessary to write what I would not have spoken. I had intended to make no reference, in my University Lectures, to existing schools of Art, except in cases where it might be necessary to point out some undervalued excellence. The objects specified in the eleventh paragraph of my inaugural Lecture might, I hoped, have been accomplished without reference to any works deserving of blame; but the Exhibition of the Royal Academy in the present year showed me a necessity of departing from my original intention....