Apu Ollantay A Drama of the Time of the Incas 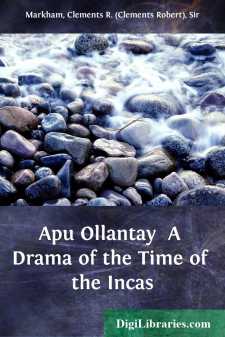 The drama was cultivated by the Incas, and dramatic performances were enacted before them. Garcilasso de la Vega, Molina, and Salcamayhua are the authorities who received and have recorded the information given by the Amautas respecting the Inca drama. Some of these dramas, and portions of others, were preserved in the memories of members of Inca and Amauta families. The Spanish priests, especially the Jesuits of Juli, soon discovered the dramatic aptitude of the people. Plays were composed and acted, under priestly auspices, which contained songs and other fragments of the ancient Inca drama. These plays were called 'Autos Sacramentales.'

But complete Inca dramas were also preserved in the memories of members of the Amauta caste and, until the rebellion of 1781, they were acted. The drama of Ollantay was first reduced to writing and arranged for acting by Dr. Don Antonio Valdez, the Cura of Tinto. It was acted before his friend Jose Gabriel Condorcanqui[FN#1] in about 1775. Taking the name of his maternal ancestor, the Inca Tupac Amaru, the ill-fated Condorcanqui rose in rebellion, was defeated, taken, and put to death under torture, in the great square of Cuzco. In the monstrous sentence 'the representation of dramas as well as all other festivals which the Indians celebrate in memory of their Incas' was prohibited.[FN#2] This is a clear proof that before 1781 these Quichua dramas were acted.

The original manuscript of Valdez was copied by his friend Don Justo Pastor Justiniani, and this copy was inherited by his son. There was another copy in the convent of San Domingo at Cuzco, but it is corrupt, and there are several omissions and mistakes of a copyist. Dr. Valdez died, at a very advanced age, in 1816. In 1853 the original manuscript was in the possession of his nephew and heir, Don Narciso Cuentas of Tinta.

The Justiniani copy was, in 1853, in the possession of Dr. Don Pablo Justiniani, Cura of Laris, and son of Don Justo Pastor Justiniani. He is a descendant of the Incas.[FN#3] In April 1853 I went to Laris, a secluded valley of the Andes, and made a careful copy of the drama of Ollantay. From this Justiniani text my first very faulty line-for-line translation was made in 1871, as well as the present free translation.

The first printed notice of Ollantay appeared in the Museo Erudito, Nos....