Antiquities of the Jews 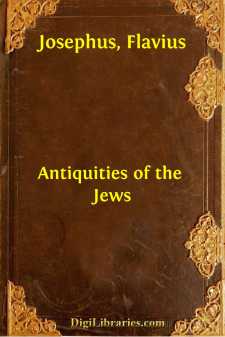 CHAPTER 1. The Constitution Of The World And The Disposition Of The Elements.

1. In the beginning God created the heaven and the earth. But when the earth did not come into sight, but was covered with thick darkness, and a wind moved upon its surface, God commanded that there should be light: and when that was made, he considered the whole mass, and separated the light and the darkness; and the name he gave to one was Night, and the other he called Day: and he named the beginning of light, and the time of rest, The Evening and The Morning, and this was indeed the first day. But Moses said it was one day; the cause of which I am able to give even now; but because I have promised to give such reasons for all things in a treatise by itself, I shall put off its exposition till that time. After this, on the second day, he placed the heaven over the whole world, and separated it from the other parts, and he determined it should stand by itself. He also placed a crystalline [firmament] round it, and put it together in a manner agreeable to the earth, and fitted it for giving moisture and rain, and for affording the advantage of dews. On the third day he appointed the dry land to appear, with the sea itself round about it; and on the very same day he made the plants and the seeds to spring out of the earth. On the fourth day he adorned the heaven with the sun, the moon, and the other stars, and appointed them their motions and courses, that the vicissitudes of the seasons might be clearly signified. And on the fifth day he produced the living creatures, both those that swim, and those that fly; the former in the sea, the latter in the air: he also sorted them as to society and mixture, for procreation, and that their kinds might increase and multiply. On the sixth day he created the four-footed beasts, and made them male and female: on the same day he also formed man. Accordingly Moses says, That in just six days the world, and all that is therein, was made. And that the seventh day was a rest, and a release from the labor of such operations; whence it is that we Celebrate a rest from our labors on that day, and call it the Sabbath, which word denotes rest in the Hebrew tongue.

2. Moreover, Moses, after the seventh day was over begins to talk philosophically; and concerning the formation of man, says thus: That God took dust from the ground, and formed man, and inserted in him a spirit and a soul. This man was called Adam, which in the Hebrew tongue signifies one that is red, because he was formed out of red earth, compounded together; for of that kind is virgin and true earth. God also presented the living creatures, when he had made them, according to their kinds, both male and female, to Adam, who gave them those names by which they are still called. But when he saw that Adam had no female companion, no society, for there was no such created, and that he wondered at the other animals which were male and female, he laid him asleep, and took away one of his ribs, and out of it formed the woman; whereupon Adam knew her when she was brought to him, and acknowledged that she was made out of himself....