Anti-Slavery Opinions before the Year 1800 Read before the Cincinnati Literary Club, November 16, 1872 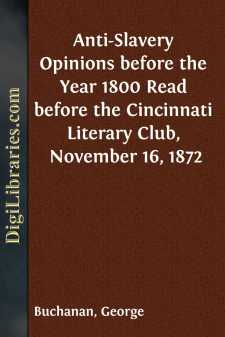 I purpose this evening to call the attention of the Club to the state of anti-slavery opinions in this country just prior to the year 1800. In this examination I shall make use of a very rare pamphlet in the library of General Washington, which seems to have escaped the notice of writers on this subject; and shall preface my remarks on the main topic of discussion with a brief description of the Washington collection.

In the library of the Boston Athenæum, the visitor sees, as he enters, a somewhat elaborately-constructed book-case, with glass front, filled with old books. This is the library of George Washington, which came into possession of the Athenæum in 1849. It was purchased that year from the heirs of Judge Bushrod Washington—the favorite nephew to whom the General left all his books and manuscripts—by Mr. Henry Stevens, of London, with the intention of placing it in the British Museum. Before the books were shipped, they were bought by Mr. George Livermore and a few other literary and public-spirited gentlemen of Boston, and presented to the Athenæum. Mr. Livermore, as discretionary executor of the estate of Thomas Dowse, the "literary leather-dresser" of Cambridge, added to the gift one thousand dollars, for the purpose of printing a description and catalogue of the collection, which has not yet been done.

The collection numbers about twelve hundred titles, of which four hundred and fifty are bound volumes, and seven hundred and fifty are pamphlets and unbound serials. Some books of the original library of General Washington still remain at Mt. Vernon, and are, or were a few years since, shown to visitors, with other curiosities.

Separated from association with their former illustrious owner, the bound volumes, which are mostly English books, present but few attractions. Among them are a few treatises on the art of war and military tactics, which evidently were never much read. These were imported after his unfortunate expedition with Braddock's army, and before the revolutionary war. There are books on horse and cattle diseases; on domestic medicine; on farming, and on religious topics—such works as we might expect to find on the shelves of a intelligent Virginia planter. It is evident that their owner was no student or specialist. Many of the books were sent to him as presents, with complimentary inscriptions by the donors. The bindings are all in their original condition, and generally of the most common description. The few exceptions were presentation copies. Col. David Humphreys, Washington's aid-de-camp during the revolutionary war, presents his "Miscellaneous Works," printed in 1790, bound, regardless of expense, by some Philadelphia binder, in full red morocco, gilt and goffered edges, and with covers and fly-leaves lined with figured satin. As the book was for a very distinguished man, the patriotic binder has stamped on the covers and back every device he had in his shop. Nearly all the volumes have the bold autograph of "Go. Washington," upon their title pages, and the well-known book-plate, with his name, armorial bearings, and motto, Exitus acta probat, on the inside of the covers.

There are persons at the present day who have very positive opinions on the subject of prose fiction, believing that great characters like Jonathan Edwards and George Washington never read such naughty books when they were young. Let us see. Here is the "Adventures of Peregrine Pickle; in which are included the Memoirs of a Lady of Quality," by Tobias Smollett, in three volumes....