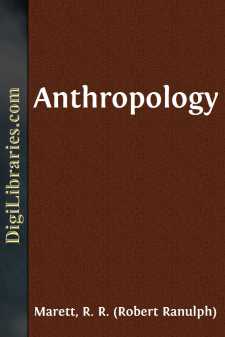 CHAPTER I SCOPE OF ANTHROPOLOGY

In this chapter I propose to say something, firstly, about the ideal scope of anthropology; secondly, about its ideal limitations; and, thirdly and lastly, about its actual relations to existing studies. In other words, I shall examine the extent of its claim, and then go on to examine how that claim, under modern conditions of science and education, is to be made good.

Firstly, then, what is the ideal scope of anthropology? Taken at its fullest and best, what ought it to comprise?

Anthropology is the whole history of man as fired and pervaded by the idea of evolution. Man in evolution—that is the subject in its full reach. Anthropology studies man as he occurs at all known times. It studies him as he occurs in all known parts of the world. It studies him body and soul together—as a bodily organism, subject to conditions operating in time and space, which bodily organism is in intimate relation with a soul-life, also subject to those same conditions. Having an eye to such conditions from first to last, it seeks to plot out the general series of the changes, bodily and mental together, undergone by man in the course of his history. Its business is simply to describe. But, without exceeding the limits of its scope, it can and must proceed from the particular to the general; aiming at nothing less than a descriptive formula that shall sum up the whole series of changes in which the evolution of man consists.

That will do, perhaps, as a short account of the ideal scope of anthropology. Being short, it is bound to be rather formal and colourless. To put some body into it, however, it is necessary to breathe but a single word. That word is: Darwin.

Anthropology is the child of Darwin. Darwinism makes it possible. Reject the Darwinian point of view, and you must reject anthropology also. What, then, is Darwinism? Not a cut-and-dried doctrine. Not a dogma. Darwinism is a working hypothesis. You suppose something to be true, and work away to see whether, in the light of that supposed truth, certain facts fit together better than they do on any other supposition. What is the truth that Darwinism supposes? Simply that all the forms of life in the world are related together; and that the relations manifested in time and space between the different lives are sufficiently uniform to be described under a general formula, or law of evolution.

This means that man must, for certain purposes of science, toe the line with the rest of living things. And at first, naturally enough, man did not like it. He was too lordly. For a long time, therefore, he pretended to be fighting for the Bible, when he was really fighting for his own dignity. This was rather hard on the Bible, which has nothing to do with the Aristotelian theory of the fixity of species; though it might seem possible to read back something of the kind into the primitive creation-stories preserved in Genesis. Now-a-days, however, we have mostly got over the first shock to our family pride....