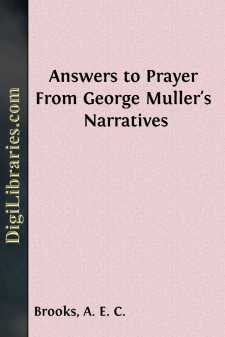 BEGINNING AND EARLY DAYS OF THE ORPHAN WORK.

"That the trial of your faith, being much more precious than of gold that perisheth, though it be tried with fire, might be found unto praise and honour and glory at the appearing of Jesus Christ."—1 Peter, i. 7.

Mr. George Müller, the founder of the New Orphan-Houses, Ashley Down, Bristol (institutions that have been for many years the greatest monuments of modern times to a prayer-answering God), gives in that most valuable and instructive book, "A Narrative of Some of the Lord's Dealings with George Müller," Vol. I., among other reasons for establishing an Orphan-House, the following:—

"Sometimes I found children of God tried in mind by the prospect of old age, when they might be unable to work any longer, and therefore were harassed by the fear of having to go into the poor-*house. If in such a case I pointed out to them, how their Heavenly Father has always helped those who put their trust in Him, they might not, perhaps, always say, that times have changed; but yet it was evident enough, that God was not looked upon by them as the Living God. My spirit was ofttimes bowed down by this, and I longed to set something before the children of God, whereby they might see, that He does not forsake, even in our day, those who rely upon Him.

"Another class of persons were brethren in business, who suffered in their souls, and brought guilt on their consciences, by carrying on their business, almost in the same way as unconverted persons do. The competition in trade, the bad times, the over-peopled country, were given as reasons why, if the business were carried on simply according to the word of God, it could not be expected to do well. Such a brother, perhaps, would express the wish, that he might be differently situated; but very rarely did I see that there was a stand made for God, that there was the holy determination to trust in the living God, and to depend on Him, in order that a good conscience might be maintained. To this class likewise I desired to show, by a visible proof, that God is unchangeably the same.

"Then there was another class of persons, individuals who were in professions in which they could not continue with a good conscience, or persons who were in an unscriptural position with reference to spiritual things; but both classes feared, on account of the consequences, to give up the profession in which they could not abide with God, or to leave their position, lest they should be thrown out of employment. My spirit longed to be instrumental in strengthening their faith, by giving them not only instances from the word of God, of His willingness and ability to help all those who rely upon Him, but to show them by proofs, that He is the same in our day. I well knew that the Word of God ought to be enough, and it was, by grace, enough, to me; but still, I considered that I ought to lend a helping hand to my brethren, if by any means, by this visible proof to the unchangeable faithfulness of the Lord, I might strengthen their hands in God; for I remembered what a great blessing my own soul had received through the Lord's dealings with His servant A....