Answer to Dr. Priestley's Letters to a Philosophical Unbeliever 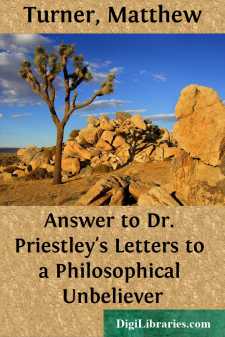 The Editor of this publication has more in object to answer Dr. Priestley than to deliver his own sentiments upon Natural Religion, which however he has no inclination to disguise: but he does not mean to be answerable for them farther, than as by reason and nature he is at present instructed. The question here handled is not so much, whether a Deity and his attributed excellences exist, as whether there is any Natural or Moral proof of his existence and of those attributes. Revealed knowledge is not descanted upon; therefore Christians at least need take no offence. Doubts upon Natural Religion have not hitherto been looked upon as attacks upon Revelation, but rather as corroborations of it. What the Editor believes as a Christian (if he is one is therefore another affair, nor does he reckon himself so infallible or incapable of alteration in his sentiments, as not at another time to adopt different ones upon more reflexion and better information; therefore, though he has at present little or no doubt of what he asserts (taken upon the principles laid down) he shall hold himself totally freed from any necessity of defending the contents of this publication if brought into controversy; and as he has no desire of making converts, hopes he shall not himself be marked out as an object of persecution.

Speculative points have always been esteemed fair matters for a free discussion. The religion established in this country is not the religion of Nature, but the religion of Moses and Jesus, with whom the writer has nothing to do. He trusts therefore he shall not be received as a malevolent disturber of such common opinions as are esteemed to keep in order a set of low wretches so inclinable to be lawless. At least, if he attempts to substitute better foundations for morality, malevolence can be no just charge. Truth is his aim; and no professors of religion will allow their system to be false. Or if he should be thought too bold a speculator, such of the ecclesiastics as will be his opponents may rather laugh at him than fear him. They have a thousand ways of making their sentiments go down with the bulk of mankind, to one this poor writer has. They are an army ready marshalled for the support of their own thesis; they are in the habit of controversy; pulpits are open to them as well as the press; and while the present author will be looked upon as a miracle of hardiness for daring to put his name to what he publishes, they can without fear or imputation lift up their heads; and should they even be known to transgress the bounds of good sense or politeness, they will only be esteemed as more zealous labourers in their own vocation.

Your Letters addressed to a Philosophical Unbeliever I perused, not because I was a Philosopher or an Unbeliever; it were presumption to give myself the former title, and at that time I certainly did not deserve the latter; but as I was acquainted with another, who in reality, as far as I and others who know him can judge, deserves the title of a Philosopher and is neither ashamed nor afraid of that of an Unbeliever, I conceived them apt to be sent to my friend, and when I presented them to him, he said he was the person whom he should suppose you meant to address, if you had a particular person in view; but he had too much understanding of the world, though much abstracted from the dregs of it, not to conceive it more probable that you meant your Letters to be perused by thinking men in general, Believers and Unbelievers, to confirm the former in their creed, and to convert the latter from their error....