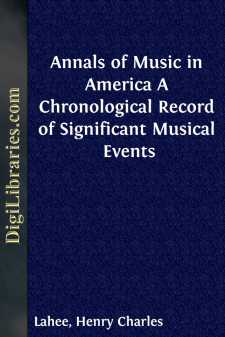 The Annals of Music in America during the first hundred years contain very little that would seem to be of any importance to the musicians of today. Nevertheless it is as interesting to note the beginnings of music in this newly settled country as to watch the appearance of the baby's first tooth.

The first settlement at Plymouth took place in 1620, and we find that in 1640 the colonists were already busy with the printing press in Cambridge, Mass., and the second book which came from the press was a reprint of an English Psalm book, printed under the title of the Bay Psalm Book. This was not an original work, but its production shows that music was already a living problem, and was even then part of the life of the colonists.

Practically nothing more of note happened until the importation of the first pipe organ, in 1700. This was quickly followed by other similar instruments in different parts of the country, and even by the building of organs by Americans, the first being by John Clemm in New York, which contained three manuals and twenty-six stops, and the next by Edward Bromfield in Boston. Bromfield's organ had two manuals and 1200 pipes, but was not completed when he died in 1746.

The early history of music in New England, as handed down to us by writers on the subject, seems to have consisted chiefly of church singing, concerning which there were many controversies. The early composers of New England were mainly occupied in composing psalm tunes, and in teaching singing schools.

It must not, however, be supposed that New England had no secular music. The concert above mentioned goes to show the contrary. Also there is a record of small wind instruments, such as oboes and flageolets, being brought to Boston for the purposes of trade—possibly with the idea that New England shepherds might play to their sheep, as shepherds in other countries are supposed to do.

We know that every farm had its spinning wheel and that clothes were made of the homespun woollens, but neither historian nor poet has ever pictured a New England shepherd with the shepherd's pipe. Imagination has not so far run riot.

Music was in a very elementary stage during the first hundred years. The country was sparsely populated, and music depends on the existence of a community. Even in 1750 the cows, according to tradition, were still occupied, during their daily peregrinations, in laying out the streets of the future city of Boston,—a city which was destined to be one of the leaders in matters musical.

Note. When a work is mentioned as "given" or "played" or "presented," it means the first performance in America....