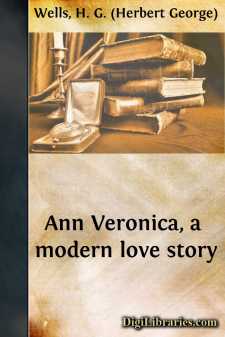 One Wednesday afternoon in late September, Ann Veronica Stanley came down from London in a state of solemn excitement and quite resolved to have things out with her father that very evening. She had trembled on the verge of such a resolution before, but this time quite definitely she made it. A crisis had been reached, and she was almost glad it had been reached. She made up her mind in the train home that it should be a decisive crisis. It is for that reason that this novel begins with her there, and neither earlier nor later, for it is the history of this crisis and its consequences that this novel has to tell.

She had a compartment to herself in the train from London to Morningside Park, and she sat with both her feet on the seat in an attitude that would certainly have distressed her mother to see, and horrified her grandmother beyond measure; she sat with her knees up to her chin and her hands clasped before them, and she was so lost in thought that she discovered with a start, from a lettered lamp, that she was at Morningside Park, and thought she was moving out of the station, whereas she was only moving in. "Lord!" she said. She jumped up at once, caught up a leather clutch containing notebooks, a fat text-book, and a chocolate-and-yellow-covered pamphlet, and leaped neatly from the carriage, only to discover that the train was slowing down and that she had to traverse the full length of the platform past it again as the result of her precipitation. "Sold again," she remarked. "Idiot!" She raged inwardly while she walked along with that air of self-contained serenity that is proper to a young lady of nearly two-and-twenty under the eye of the world.

She walked down the station approach, past the neat, obtrusive offices of the coal merchant and the house agent, and so to the wicket-gate by the butcher's shop that led to the field path to her home. Outside the post-office stood a no-hatted, blond young man in gray flannels, who was elaborately affixing a stamp to a letter. At the sight of her he became rigid and a singularly bright shade of pink. She made herself serenely unaware of his existence, though it may be it was his presence that sent her by the field detour instead of by the direct path up the Avenue.

"Umph!" he said, and regarded his letter doubtfully before consigning it to the pillar-box. "Here goes," he said. Then he hovered undecidedly for some seconds with his hands in his pockets and his mouth puckered to a whistle before he turned to go home by the Avenue.

Ann Veronica forgot him as soon as she was through the gate, and her face resumed its expression of stern preoccupation. "It's either now or never," she said to herself....

Morningside Park was a suburb that had not altogether, as people say, come off. It consisted, like pre-Roman Gaul, of three parts. There was first the Avenue, which ran in a consciously elegant curve from the railway station into an undeveloped wilderness of agriculture, with big, yellow brick villas on either side, and then there was the pavement, the little clump of shops about the post-office, and under the railway arch was a congestion of workmen's dwellings....