Animal Ghosts Or, Animal Hauntings and the Hereafter 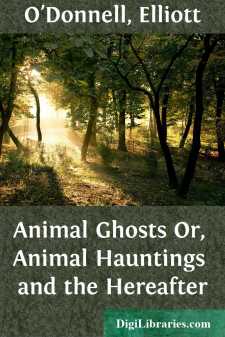 In opening this volume on Animals and their associations with the unknown, I will commence with a case of hauntings in the Old Manor House, at Oxenby.

My informant was a Mrs. Hartnoll, whom I can see in my mind's eye, as distinctly as if I were looking at her now. Hers was a personality that no lapse of time, nothing could efface; a personality that made itself felt on boys of all temperaments, most of all, of course, on those who—like myself—were highly strung and sensitive.

She was classical mistress at L.'s, the then well-known dame school in Clifton, where for three years—prior to migrating to a Public School—I was well grounded in all the mysticisms of Kennedy's Latin Primer and Smith's First Greek Principia.

I doubt if she got anything more than a very small salary—governesses in those days were shockingly remunerated—and I know,—poor soul, she had to work monstrously hard. Drumming Latin and Greek into heads as thick as ours was no easy task.

But there were times, when the excessive tension on the nerves proving too much, Mrs. Hartnoll stole a little relaxation; when she allowed herself to chat with us, and even to smile—Heavens! those smiles! And when—I can feel the tingling of my pulses at the bare mention of it—she spoke about herself, stated she had once been young—a declaration so astounding, so utterly beyond our comprehension, that we were rendered quite speechless—and told us anecdotes.

Of many of her narratives I have no recollection, but one or two, which interested me more than the rest, are almost as fresh in my mind as when recounted. The one that appealed to me most, and which I have every reason to believe is absolutely true, is as follows:—I give it as nearly as I can in her own somewhat stilted style:—

"Up to the age of nineteen, I resided with my parents in the Manor House, Oxenby. It was an old building, dating back, I believe, to the reign of Edward VI, and had originally served as the residence of noble families. Built, or, rather, faced with split flints, and edged and buttressed with cut grey stone, it had a majestic though very gloomy appearance, and seen from afar resembled nothing so much as a huge and grotesquely decorated sarcophagus. In the centre of its frowning and menacing front was the device of a cat, constructed out of black shingles, and having white shingles for the eyes; the effect being curiously realistic, especially on moonlight nights, when anything more lifelike and sinister could scarcely have been conceived. The artist, whoever he was, had a more than human knowledge of cats—he portrayed not merely their bodies but their souls.

I have subsequently met several people who experienced the same phenomena in the house, which was standing a short time ago.

"In style the front of the house was somewhat castellated. Two semicircular bows, or half towers, placed at a suitable distance from each other, rose from the base to the summit of the edifice, to the height of four or five stairs; and were pierced, at every floor, with rows of stone-mullioned windows. The flat wall between had larger windows, lighting the great hall, gallery, and upper apartments. These windows were wholly composed of stained glass, engraved with every imaginable fantastic design—imps, satyrs, dragons, witches, queer-shaped trees, hands, eyes, circles, triangles and cats.

"The towers, half included in the building, were completely circular within, and contained the winding stairs of the mansion; and whoever ascended them when a storm was raging seemed rising by a whirlwind to the clouds.

"In the upper rooms even the wildest screams of the hurricane were drowned in the rattling clamour of the assaulted casements. When a gale of wind took the building in front, it rocked it to the foundations, and, at such times, threatened its instant demolition.

"Midway between the towers there stood forth a heavy stone porch with a Gothic gateway, surmounted by a battlemented parapet, made gable fashion, the apex of which was garnished by a pair of dolphins, rampant and antagonistic, whose corkscrew tails seemed contorted—especially at night—by the last agonies of rage convulsed. The porch doors stood open, except in tremendous weather; the inner ones were regularly shut and barred after all who entered. They led into a wide vaulted and lofty hall, the walls of which were decorated with faded tapestry, that rose, and fell, and rustled in the most mysterious fashion every time there was the suspicion—and often barely the suspicion—of a breeze.

"Interspersed with the tapestry—and in great contrast to its antiquity—were quite modern and very ordinary portraits of my family....