Anecdotes of the Habits and Instinct of Animals 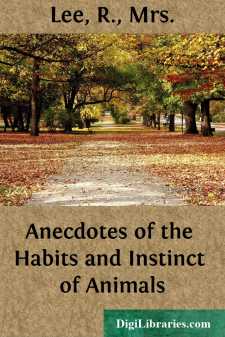 THE QUADRUMANA, OR MONKEY TRIBE.

Formed like man, and practicing similar gestures, but with thumbs instead of great toes upon their feet, and with so narrow a heel-bone, that even those who constantly walk upright have not the firm and dignified step of human beings; the Quadrumana yet approximate so closely to us, that they demand the first place in a book devoted principally to the intellectual (whether it be reason or instinct) history of animals. This approximation is a matter of amusement to some; but to the larger portion of mankind, I should say, it is a source of disgust. "Rapoynda," I exclaimed, one day, to a troublesome, inquisitive, restless negro, pointing to a black monkey, which much resembled him in character, "that is your brother." Never shall I forget the malignant scowl which passed over the man's features at my heedless comparison. No apology, no kindness, not even the gift of a smart waistcoat, which he greatly coveted, ever restored me to his good graces; and I was not sorry when his Chief summoned him from my vicinity, for I dreaded his revenge.

A few years after, I stood lost in admiration before Sir Edwin Landseer's inimitable picture of "the monkey who had seen the world," in which nature and truth lend their tone and force to the highest efforts of art; when a voice exclaimed, "How can you waste your time looking at that thing; such creatures ought never to have been painted;" and although the speaker was a religious man, he muttered to himself, "I am not sure they ought ever to have been made." The voice proceeded from one of the finest instances of manly beauty; one famed also for talent and acquirement. Rapoynda started into my recollection; and as I slowly left the talented picture, I could not help smiling at the common feeling between the savage and the gentleman, thereby proving its universality.

Never did any one start for a tropical climate with a greater antipathy towards these "wild men" than I did; I lived years in their vicinity and yet contrived to avoid all contact with them, and it was not till I was homeward-bound that my conversion was effected. The ship in which Mr. Bowdich and myself took a round-about course to England, was floating on a wide expanse of water, disturbed only by the heavy swell, which forms the sole motion in a calm; the watch on deck were seated near the bows of the vessel, the passengers and officers were almost all below, there was only myself and the helmsman on the after-deck; he stood listlessly by the binnacle, and I was wholly occupied in reading. A noise between a squeak and a chatter suddenly met my ears; and before I could turn my head to see whence it proceeded, a heavy, living creature jumped on to my shoulders from behind, and its tail encircled my throat. I felt it was Jack, the cook's monkey; the mischievous, malicious, mocking, but inimitable Jack, whose pranks had often made me laugh against my will, as I watched him from a distance, but with whom I had never made the least acquaintance. Whether from fear or presence of mind I do not pretend to say, but I remained perfectly still, and in a minute or two Jack put his head forward and stared me in the face, uttering a sort of croak; he then descended on to my knees, examined my hands as if he were counting my fingers, tried to take off my rings, and when I gave him some biscuit, curled himself compactly into my lap....