Anecdotes of Painters, Engravers, Sculptors and Architects and Curiosities of Art (Vol. 3 of 3) 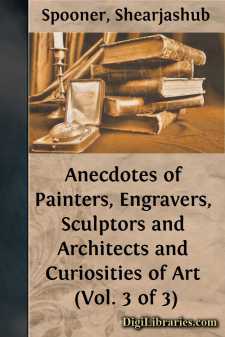 Champollion, the famous explorer of Egyptian antiquities, holds the following language at the end of his fifteenth letter, dated at Thebes. "It is evident to me, as it must be to all who have thoroughly examined Egypt or have an accurate knowledge of the Egyptian monuments existing in Europe, that the arts commenced in Greece by a servile imitation of the arts in Egypt, much more advanced than is vulgarly believed, at the period when the Egyptian colonies came in contact with the savage inhabitants of Attica or the Peloponnesus. Without Egypt, Greece would probably never have become the classical land of the fine arts. Such is my entire belief on this great problem. I write these lines almost in the presence of bas-reliefs which the Egyptians executed, with the most elegant delicacy of workmanship, seventeen hundred years before the Christian era. What were the Greeks then doing?"

The sculptures of the monument of El Asaffif are ascertained to be more than three thousand five hundred years old.

Thebes, an ancient city and capital of Egypt, and the oldest city in the world, was situated in Upper Egypt, on both sides of the Nile, about two hundred and sixty miles south of Cairo. Thebes is "the city of a hundred gates," the theme and admiration of ancient poets and historians, and the wonder of travelers—"that venerable city," in the language of Dr. Pocoke, "the date of whose destruction is older than the foundation of other cities, and the extent of whose ruins, and the immensity of whose colossal fragments still offer so many astonishing objects, that one is riveted to the spot, unable to decide whither to direct the step, or fix the attention." These ruins extend about eight miles along the Nile, from each bank to the sides of the enclosing mountains, and describe a circuit of twenty-seven miles. The most remarkable objects on the eastern side are the temples of Carnac and Luxor; and on the western side are the Memnonium or palace of Memnon, two colossal statues, the sepulchres of the kings, and the temple of Medinet Abu. The glory of Thebes belongs to a period prior to the commencement of authentic history. It is recorded only in the dim lights of poetry and tradition, which might be suspected of fable, did not such mighty witnesses remain to attest their truth. Strabo and Diodorus Siculus described Thebes under the name of Diospolis (the city of God), and gave such magnificent descriptions of its monuments as caused the fidelity of those writers to be called in question, till the observations of modern travelers proved their accounts to have fallen short of the reality. At the time of the Persian invasion under Cambyses, Memphis had supplanted Thebes; and the Ptolemys afterwards removed the seat of empire to Alexandria. At present, its site presents only a few scattered villages, consisting of miserable cottages built in the courts of the temples. The ancient structures, however, remain in a state of wonderful preservation. Almost the whole extent of eight miles along the river is covered with magnificent portals, obelisks decorated with most beautiful sculptures, forests of columns, and long avenues of sphynxes and colossal statues....