Anecdotes of Painters, Engravers, Sculptors and Architects, and Curiosities of Art, (Vol. 2 of 3) 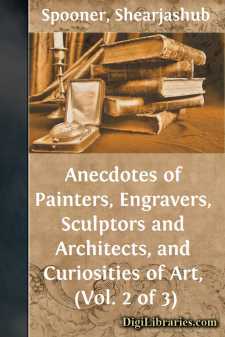 The name of this illustrious painter was Tiziano Vecellio or Vecelli, and he is called by the Italians, Tiziano Vecellio da Cadore. He was descended of a noble family; born at the castle of Cadore in the Friuli in 1477, and died in 1576, according to Ridolfi; though Vasari and Sandrart place his birth in 1480. Lanzi says he died in 1576, aged 99 years. He early showed a passion for the art, which was carefully cultivated by his parents.—Lanzi says in a note, that it is pretty clearly ascertained that he received his first instruction from Antonio Rossi, a painter of Cadore; if so, it was at a very tender age, for when he was ten years old he was sent to Trevigi, and placed under Sebastiano Zuccati. He subsequently went to Venice, and studied successively under Gentile and Giovanni Bellini. Giorgione was his fellow-student under the last named master, with whom Titian made extraordinary progress, and attained such an exact imitation of his style that their works could scarcely be distinguished, which greatly excited the jealousy of Bellini.

On the death of Giorgione, Titian rose rapidly into favor. He was soon afterwards invited to the court of Alphonso, Duke of Ferrara, for whom he painted his celebrated picture of Bacchus and Ariadne, and two other fabulous subjects, which still retain somewhat of the style of Giorgione. It was there that he became acquainted with Ariosto, whose portrait he painted, and in return the poet spread abroad his fame in the Orlando Furioso. In 1523, the Senate of Venice employed him to decorate the Hall of the Council Chamber, where he represented the famous Battle of Cadore, between the Venetians and the Imperialists—a grand performance, that greatly increased his reputation. This work was afterwards destroyed by fire, but the composition has been preserved by the burin of Fontana. His next performance was his celebrated picture of St. Pietro Martire, in the church of SS. Giovanni e Paolo, at Venice, which is generally regarded as his master-piece in historical painting. This picture was carried to Paris by the French, and subsequently restored by the Allies. Notwithstanding the importance of these and other commissions, and the great reputation he had acquired, it is said, though with little probability of truth, that he received such a small remuneration for his works, that he was in actual indigence in 1530, when the praises bestowed upon him in the writings of his friend Pietro Aretino, recommended him to the notice of the Emperor Charles V., who had come to Bologna to be crowned by Pope Clement VII. Titian was invited thither, and painted the portrait of that monarch, and his principal attendants, for which he was liberally rewarded.—About this time, he was invited to the court of the Duke of Mantua, whose portrait he painted, and decorated a saloon in the palace with a series of the Twelve Cæsars, beneath which Giulio Romano afterwards painted a subject from the history of each. In 1543, Paul III. visited Ferrara, where Titian was then engaged, sat for his portrait and invited him to Rome, but previous engagements with the Duke of Urbino, obliged him to decline or defer the invitation....