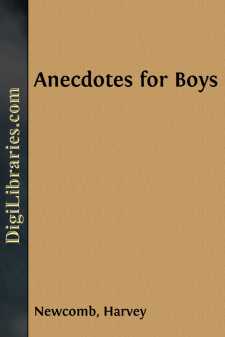 THE BOY MAKES THE MAN.

A MAN’S character is formed early in life. There may be some exceptions. In some instances, very great changes take place after a person has grown to manhood. But, even in such cases, many of the early habits of thought, feeling, and action still remain. And sometimes, we are disappointed in the favorable appearances of early life. Not unfrequently the promising boy, in youth or early manhood, runs a rapid race downward in the road to ruin. All the promising appearances failed, because they were not formed upon religious principle and a change of heart. But, as a general rule, show me the boy, and I will show you the man. The following cases afford illustrations of this principle.

I suppose all my readers have heard of Benedict Arnold, the traitor; and of his attempt to betray his country into the hands of the British, during the Revolutionary War. His name is a by-word in the mouth of every lover of liberty in the land. But there are few that know how he came to be such a character. When we come to learn his early history we feel no more surprise. His father was an intemperate man; and at an early age, Benedict was placed with an apothecary, in Norwich, Connecticut, his native town. His master soon discovered in him the most offensive traits of character. He seemed to be entirely destitute of moral principle, and even of conscience. He added to a passionate love of mischief a cruel disposition and a violent, ungovernable temper. He had no sympathy with any thing that was good. His boyish pleasures were of the criminal and unfeeling cast. He would rob the nests of birds, and mangle and maim the young ones, that he might be diverted by their mother’s cries. He would throw broken pieces of glass into the street, where the children passed barefooted, that they might hurt their feet. He would persuade the little boys to come round the door of his shop, and then beat them with a horse-whip. All this showed a malicious disposition, and great hardness of heart. He hated instruction and despised reproof; and his master could not instil into his mind any religious or moral principles, nor make any good impression upon his heart.

Before Benedict had reached his sixteenth year, he twice enlisted as a soldier and was brought back by his friends. He repaid his mother’s kindness with baseness and ingratitude; so that, between the intemperance and wretchedness of the father, and the cruelty and depravity of the son, she died of a broken heart. When he grew up, the same character followed him. We need not be surprised, then, that, in the most critical period of his country’s history, he betrayed his trust. He was a General in the American Army, in the Revolutionary War; and by his extravagance, and his overbearing behavior, he brought upon himself a reprimand from the American Congress. His temper, naturally impetuous, had never been controlled, and he could not bear reproof. He was bent on revenge; and to accomplish it, he entered into a negotiation, through Major André, to deliver up West Point, of which he had the command, to the enemy....