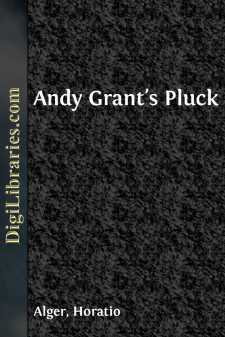 CHAPTER I. THE TELEGRAM.

"A telegram for you, Andy!" said Arthur Bacon, as he entered the room ofAndy Grant in Penhurst Academy.

"A telegram!" repeated Andy, in vague alarm, for the word suggested something urgent—probably bad news of some kind.

He tore open the envelope and read the few words of the message:

"Come home at once. Something has happened.

"What can it be?" thought Andy, perplexed. "At any rate, mother is well, for she sent the telegram."

"What is it?" asked Arthur.

"I don't know. You can read the telegram for yourself."

"Must you go home?" asked Arthur, in a tone of regret.

"At three this afternoon."

"But won't you come back again?"

"I don't know. I am all in the dark. I think something must have happened to my father."

Dr. Crabb was at his desk in his library—it was Saturday afternoon, and school was not in session—when Andy knocked at the door.

"Come in!" said the doctor, in a deep voice.

Andy opened the door and entered. Dr. Crabb smiled, for Andy was his favorite pupil.

"Give me permission to go home. I have just had a telegram. I will show it to you."

The doctor was a man of fifty-five, with a high forehead and an intellectual face. He wore glasses, and had done so for ten years. They gave him the appearance of a learned scholar, as he was.

"Dear me!" he said. "How unfortunate! Only two weeks to the end of the term, and you are our primus!"

"I am very sorry, sir; but perhaps I may be able to come back."

"Do so, by all means, if you can. There is hardly a pupil I could not better spare."

"Thank you, sir," said Andy gratefully. "There is a train at three o'clock. I would like to take it."

"By all means. And let me hear from you, even if you can't come back."

"I will certainly write, doctor. Thank you for all your kindness."

Penhurst Academy was an endowed school. On account of the endowments, the annual rate to boarding scholars was very reasonable—only three hundred dollars, including everything.

The academy had a fine reputation, which it owed in large part to the high character and gifts of Dr. Crabb, who had been the principal for twenty-five years. He had connected himself with the school soon after he left Dartmouth, and had been identified with it for the greater part of his active life.

Andy had been a pupil for over two years, and was an excellent Latin andGreek scholar. In a few months he would be ready for college.

Dr. Crabb was anxious to have him go to Dartmouth, his own alma mater, being convinced that he would do him credit and make a brilliant record for scholarship. Indeed, it was settled that he would go, his parents being ready to be guided by the doctor's advice.

From Penhurst to Arden, where Andy's parents lived, was fifty miles.Starting at three o'clock, the train reached Arden station at five.

As Andy stepped on the platform he saw Roland Hunter, the son of a neighbor....