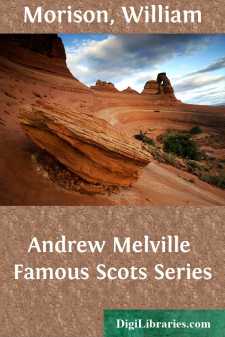 While Andrew Melville has other claims on the lasting honour of his countrymen than the part he took in securing for Scotland the ecclesiastical system which has been the most powerful factor in her history, it may be held as certain that where this service which filled his life is disesteemed, his biography, if read at all, will be read with only a languid interest. It will be our first endeavour, therefore, to show that such a prejudice in regard to our subject is mistaken and misleading.

Melville, and all from first to last who joined in the Scottish resistance to Episcopacy, were persuaded that the controversy in which they were engaged was one not academic merely but vital, and that, as it was settled one way or the other, so would the people be left in a position in which they would be able to develop their religious life with freedom and effect, or in one which would incalculably cripple it. That is a contention which history has amply vindicated.

The best justification of the struggle carried on during the period from Melville to the Revolution (1574-1688) to preserve the Presbyterian system in the Church is to be found in the benefits which that system has conferred upon the country. It has penetrated the whole Christian people with a sense of their individual responsibility in connection with the principles and government of the Church; it has saved the Church from being dwarfed into a mere clerical corporation; it has laid for it a broad and strong basis by winning to it the attachment of its common members, and by exercising their intelligence, sympathy, and interest in regard to all its institutions and enterprises. It may be truly said of the Scottish people that their highest patriotism has been elicited and exercised over the religious problems of the nation; that they have shown more sensitiveness concerning their religious rights, liberties, and duties than concerning any other interest of their life; and that they have been more readily and deeply touched when the honour and efficiency of their Church was at stake than by any other cause whatever. How should an ecclesiastical system better vindicate its claim? Nothing so ennobles a people as the care of matters of high concern—such a care as Presbyterianism has laid on the Scottish people.

But it was not only the conviction of the excellence of their own economy that led the Presbyterians to maintain it at all hazards—it was also their fear of many tendencies in the rival system. They dreaded that the imposition of Episcopacy would ultimately undo the work of the Reformation, and bring the nation once more under the yoke of Rome. Here, too, history has justified them. Had it not been for the conjunction of the forces of the Scottish Presbyterians and the English Puritans during the reign of Charles the First, the designs of that monarch against the Protestantism of both kingdoms could not probably have been checked. The least that can be said with truth on this matter is, that the Protestantism of the country was gravely imperilled in his reign and in the reigns of his two immediate successors, and that the resolute attitude of Scotland counted more than any other one influence in preserving it....