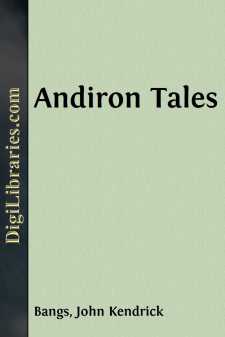 Tom and the Andirons

It was perfectly natural in one respect, anyhow. There was really no reason in the world why Tom should not lie upon the great bear-skin rug in front of the library fire those cold winter nights if he wanted to, nor need anyone be surprised that he should want to. It was indeed a most delightful place to lie in. The bear-skin was soft and in every way comfortable and comforting. The fireplace itself was one of those huge hospitable affairs that might pass in some apartment houses in our narrow cooped-up city streets for a butler's pantry or small reception room—in fact in the summer time Tom used to sit in the fireplace and pretend he was in his office transacting business with such of his sister's dolls as could be induced to visit him there; giving orders to imaginary clerks and bookkeepers and keeping an equally fanciful office boy continually on the run. And then apart from the rug and the fireplace it was a beautiful room in which they were. Tom's father was very fond of books, and, although he was a great many years older than Tom, he had not forgotten how to enjoy the very same kind of books that Tom liked. He was not ashamed to have one little niche of his library filled with the stories which had delighted him in his boyhood days, and which still continued to please him, and, of course, this lent an additional charm to the library in Tom's eyes. It held his heroes, and on some of those drowsy nights when the only sounds to break the stillness of the room were the scratching of his father's pen, the soft humming of some little tune by his mother sitting and sewing by the evening lamp, and the fierce crackling of the burning logs, Tom could almost see these heroes stepping down from the shelves and like so many phantoms flitting in and about the room. In fact, upon one occasion, Tom is convinced he did see these very people having a dance upon the great tiled hearth—but of that you shall hear later.

There were many other things in the library beside his heroes that interested Tom. There was a little Japanese ivory god that used to sit up on the mantel shelf and gaze wisely at him, as much as to say, "Dear me, boy, what a lot I could tell you if I only would!" Then, too, there was a very handsome vase on top of one of the book-cases that had two remarkable dragons climbing up its sides, the tail of one of them so fixed that if anyone chose to use the vase for a pitcher the tail would make a very convenient handle, at which the other dragon always appeared to be laughing heartily, which he had no reason to do, because his own tail was not arranged any too gracefully. But the things that, next to Jack the Giant Killer, and Beauty and the Beast, and Tom Thumb and his other heroes and heroines, Tom liked the most, were two great brazen Andirons that stood in the fireplace. To Tom these Andirons, though up to the night when our story begins he had never seen them move, seemed almost to live. They had big, round, good-natured faces, that shone like so much gold. Their necks were slight and graceful, but as they developed downward toward their handsome feet the Andirons grew more portly, until finally they came to look very much like a pair of amiable sea serpents without much length. Tom's uncle said they looked like cats, with sunflowers for heads, swan necks for bodies, and very little of the cat about them save the claws. This description made Tom laugh, but the more he thought about it the more truthful did it seem to him to be.

For so long a time as Tom could remember, summer and winter, those Andirons had sat staring stolidly ahead in their accustomed place, and not until that December night had they even so much as winked at him—but on that occasion they more than made up for all their previous silence and seeming unsociability. Tom was lying on the rug, as usual, and I am afraid was almost asleep. The logs were burning fiercely and at first Tom thought that the words he heard spoken were nothing but their crackling and hissing, but in a minute he changed his mind about that for the very good reason that the "Lefthandiron"—as Tom's uncle once called it—winked his eye at Tom and said:

Tom only returned the wink....