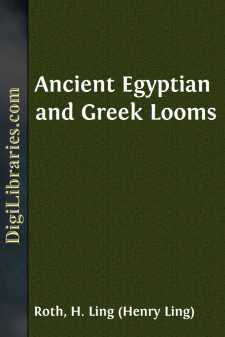 IN the tomb of Chnem-hotep, at Beni Hasan, there is a wall painting of a horizontal loom with two weavers, women, squatting on either side, and at the right in the background is drawn the figure of the taskmaster. There are also figures represented in the act of spinning, etc. For the present we are concerned with the weaving only.

Of this illustration, there appear to be six reproductions. We have first of all, , that of Fred. Cailliaud (Recherches sur les Arts et Métiers, etc., Paris, 1831) with illustrations of drawings made by himself in the years 1819 to 1822. His publication was followed by , that of Sir J. G. Wilkinson (Manners and Customs, etc., London, 1837). Mr. John Murray, whose house has published Wilkinson’s work from the first edition to the last, informs me that a few of the drawings were made by George Scharf, afterwards Sir George Scharf, Keeper of the National Portrait Gallery, but that most of them seem to have been made by Joseph Bonomi, the well known Egyptologist. Wilkinson’s woodcut, although clearly and neatly done, is on a very small scale; nevertheless it admits of a fair comparison with those reproduced on a larger scale.

After him, , N. F. J. B. Rosellini began the publication of his great work (I Monumenti dell’ Egitto, Pisa, 1832-1844). The similarity between the comparatively few drawings published by Cailliaud and the very large number published by Rosellini is very great. It is of course quite possible Rosellini may have made use of some of Cailliaud’s drawings. Five years after Rosellini’s publication came that of C. R. Lepsius (Denkmäler, Leipzig, 1849), , his drawings having been made in the years 1842 to 1845. Since the time of Lepsius until quite recent years I can trace no further copying until we get the illustration, , in Prof. Percy Newberry’s Beni Hasan, London, 1910. In this work the reproduction is about one twentieth of the original, or about three fifths of the size of that of Wilkinson, and unfortunately so crude as not to be available for our present purpose. Lastly we have the reproduction,