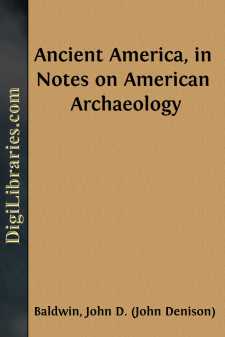 One of the most learned writers on American antiquities, a Frenchman, speaking of discoveries in Peru, exclaims, “America is to be again discovered! We must remove the veil in which Spanish politics has sought to bury its ancient civilization!” In this case, quite as much is due to the ignorance, indifference, unscrupulous greed, and religious fanaticism of the Spaniards, as to Spanish politics. The gold-hunting marauders who subjugated Mexico and Peru could be robbers and destroyers, but they were not qualified in any respect to become intelligent students of American antiquity. What a select company of investigators, such as could be organized in our time, might have done in Mexico and Central America, for instance, three hundred and fifty years ago, is easily understood. In what they did, and in what they failed to do, the Spaniards who went there acted in strict accordance with such character as they had; and yet we are not wholly without obligation to some of the more intelligent Spaniards connected with the Conquest.

There are existing monuments of an American ancient history which invite study, and most of which might, doubtless, have been studied more successfully in the first part of the sixteenth century, before nearly all the old books of Central America had been destroyed by Spanish fanaticism, than at present. Remains of ancient civilizations, differing to some extent in degree and character, are found in three great sections of the American continent: the west side of South America, between Chili and the first or second degree of north latitude; Central America and Mexico; and the valleys of the Mississippi and the Ohio. These regions have all been explored to some extent—not completely, but sufficiently to show the significance and importance of their archæological remains, most of which were already mysterious antiquities when the continent was discovered by Columbus. I propose to give some account of these antiquities, not for the edification of those already learned in American archæology, but for general readers who have not made the subject a study. My sketches will begin with the Mississippi Valley and the regions connected with it.

An ancient and unknown people left remains of settled life, and of a certain degree of civilization, in the valleys of the Mississippi and its tributaries. We have no authentic name for them either as a nation or a race; therefore they are called “Mound-Builders,” this name having been suggested by an important class of their works.

Fig. 2.—The Great Mound, near Miamisburg.

Prominent among the remains by which we know that such a people once inhabited that region are artificial mounds constructed with intelligence and great labor. Most of them are terraced and truncated pyramids. In shape they are usually square or rectangular, but sometimes hexagonal or octagonal, and the higher mounds appear to have been constructed with winding stairways on the outside leading to their summits....