Anahuac : or, Mexico and the Mexicans, Ancient and Modern 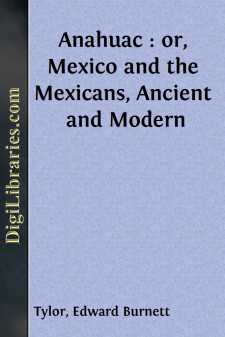 CHAPTER I. THE ISLE OF PINES.

In the spring of 1856, I met with Mr. Christy accidentally in an omnibus at Havana. He had been in Cuba for some months, leading an adventurous life, visiting sugar-plantations, copper-mines, and coffee-estates, descending into caves, and botanizing in tropical jungles, cruising for a fortnight in an open boat among the coral-reefs, hunting turtles and manatis, and visiting all sorts of people from whom information was to be had, from foreign consuls and Lazarist missionaries down to retired slave-dealers and assassins.

As for myself, I had been travelling for the best part of a year in the United States, and had but a short time since left the live-oak forests and sugar-plantations of Louisiana. We agreed to go to Mexico together; and the present notes are principally compiled from our memorandum-books, and from letters written home on our journey.

Before we left Cuba, however, we made one last excursion across the island, and to the Isla de Pinos—the Isle of Pines—off the southern coast. A volante took us to the railway-station. The volante is the vehicle which the Cubans specially affect; it is like a Hansom cab, but the wheels are much taller, six and a half feet high, and the black driver sits postillion-wise upon the horse. Our man had a laced jacket, black leather leggings, and a pair of silver spurs fastened upon his bare feet, which seemed at a little distance to have well polished boots on, they were so black and shiny.

The railway which took us from Havana to Batabano had some striking peculiarities. For a part of the way the track passed between two walls of tropical jungle. The Indian fig trees sent down from every branch suckers, like smooth strings, which rooted themselves in the ground to draw up more water. Acacias and mimosas, the seiba and the mahagua, with other hard-wood trees innumerable, crowded close to one another; while epiphytes perched on every branch, and creepers bound the whole forest into a compact mass of vegetation, through which no bird could fly. We could catch the strings of convolvulus with our walking-sticks, as the train passed through the jungle. Sometimes we came upon a swamp, where clusters of bamboos were growing, crowned with tufts of pointed leaves; or had a glimpse for a moment of a group of royal palms upon the rising ground.

We passed sugar-plantations with their wide cane-fields, the sugar-houses with tall chimneys, and the balconied house of the administrador, keeping a sharp look out over the village of negro-cabins, arranged in double lines.

In the houses near the stations where we stopped, cigar-making seemed to be the universal occupation. Men, women, and children were sitting round tables hard at work. It made us laugh to see the black men rolling up cigars upon the hollow of their thighs, which nature has fashioned into a curve exactly suited to this process.

At Batabano the steamer was waiting at the pier, and our passports and ourselves were carefully examined by the captain, for Cuba is the paradise of passport offices, and one cannot stir without a visa....