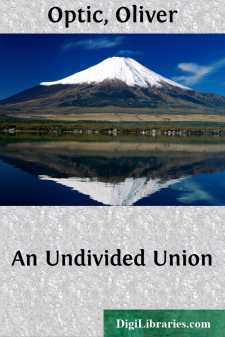 A CALL FOR ASSISTANCE

"How many miles have we still to go, Deck?"

"Not over seven by this road, Artie," replied Major Deck Lyon, commanding the first battalion, Riverlawn Cavalry, of Kentucky. "I should think the surroundings would begin to look familiar to you, even if we have been away from home for some time."

"I never frequented this road," exclaimed Captain Artie Lyon, commanding the fourth company of the Riverlawns. "Doesn't it run into that cut where you saved Kate Belthorpe and the rest of her party from that gang of so-styled 'Home Guard' ruffians?"

"I believe it does," was the slow response, and Major Dexter Lyon blushed; for although the incident referred to had occurred many months before, it was still fresh in his mind, as were also the beautiful face and bewitching eyes of the maiden. The young major was but nineteen years of age, and it could hardly be said that he was in love, yet a warm attachment had sprung up between these two people. "Does your wound trouble you in riding, Artie?" he went on, to change the subject, and thus prevent his cousin from teasing him in his most susceptible spot.

"Not enough to count." Artie paused to urge his lagging horse ahead. "I wonder if any of Morgan's desperadoes are in this neighborhood. I understood from what Captain Ripley said that they were trying to overrun the whole State. It's a pity we haven't more of such first-class sharpshooters around as he commands."

"What's the matter with Life Knox's tall boys, Artie? I reckon they can shoot about as well as any of Ripley's men, even though they are not as well drilled. If I know anything about it, Life is a whole host in himself."

"Oh, I agree with you there, Deck." There was another pause as the pair of horsemen swung around a heavily wooded bend. "What a pity father couldn't get a furlough to come home with us. I don't believe he would have been missed, when the main body of the Department of the Cumberland is doing nothing but keeping an eye on Bragg. Mother and the girls would have been delighted to see—Hullo, if there isn't Levi Bedford coming this way—and with half a dozen of the boys! Something is up, sure!"

As Captain Artie broke off, a tall, heavy-set man, mounted on a coal-black horse, burst into view, riding at a high rate of speed. Behind the man came six stout negroes; and all of the party carried guns, and the white man a pistol in addition.

"Hi, Levi!" yelled Major Deck, as soon as the party of seven came within hailing distance.

"Deck!" burst out the overseer of Riverlawn. "And Artie, by all that's fortunate!"

"De young mars'rs!" came from several of the colored men. "Proud to see yo', Mars'r Dexter, an' Mars'r Artie!"

At this Deck and Artie smiled on the slaves. Deck shook hands with Levi Bedford, and Artie followed suit. "Is there any special reason for this meeting being fortunate, Levi?" questioned the major, anxiously.

"I think so," was the hasty answer. "Less than two hours ago, and just after I had made the rounds at Riverlawn, to make sure that everything was all right, and no marauders in sight, I received this note." And the overseer passed over a small sheet of note-paper, upon which a few lines were written in pencil, in a small hand....