An Outline of the History of Christian Thought Since Kant 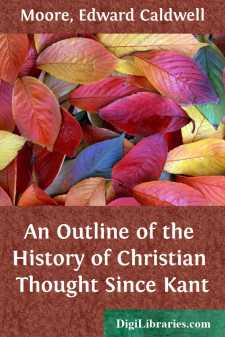 CHAPTER I A. INTRODUCTION

The Protestant Reformation marked an era both in life and thought for the modern world. It ushered in a revolution in Europe. It established distinctions and initiated tendencies which are still significant. These distinctions have been significant not for Europe alone. They have had influence also upon those continents which since the Reformation have come under the dominion of Europeans. Yet few would now regard the Reformation as epoch-making in the sense in which that pre-eminence has been claimed. No one now esteems that it separates the modern from the mediæval and ancient world in the manner once supposed. The perspective of history makes it evident that large areas of life and thought remained then untouched by the new spirit. Assumptions which had their origin in feudal or even in classical culture continued unquestioned. More than this, impulses in rational life and in the interpretation of religion, which showed themselves with clearness in one and another of the reformers themselves, were lost sight of, if not actually repudiated, by their successors. It is possible to view many things in the intellectual and religious life of the nineteenth century, even some which Protestants have passionately reprobated, as but the taking up again of clues which the reformers had let fall, the carrying out of purposes of their movement which were partly hidden from themselves.

Men have asserted that the Renaissance inaugurated a period of paganism. They have gloried that there supervened upon this paganism the religious revival which the Reformation was. Even these men will, however, not deny that it was the intellectual rejuvenation which made the religious reformation possible or, at all events, effective. Nor can it be denied that after the Revolution, in the Protestant communities the intellectual element was thrust into the background. The practical and devotional prevailed. Humanism was for a time shut out. There was more room for it in the Roman Church than among Protestants. Again, the Renaissance itself had been not so much an era of discovery of a new intellectual and spiritual world. It had been, rather, the rediscovery of valid principles of life in an ancient culture and civilisation. That thorough-going review of the principles at the basis of all relations of the life of man, which once seemed possible to Renaissance and Reformation, was postponed to a much later date. When it did take place, it was under far different auspices.

There is a remarkable unity in the history of Protestant thought in the period from the Reformation to the end of the eighteenth century. There is a still more surprising unity of Protestant thought in this period with the thought of the mediæval and ancient Church. The basis and methods are the same. Upon many points the conclusions are identical. There was nothing of which the Protestant scholastics were more proud than of their agreement with the Fathers of the early Church. They did not perceive in how large degree they were at one with Christian thinkers of the Roman communion as well....