An Introduction to the mortuary customs of the North American Indians 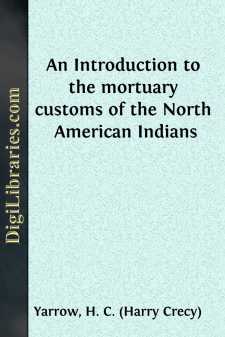 The mortuary customs of savage or barbaric people have a deep significance from the fact that in them are revealed much of the philosophy of the people by whom they are practiced. Early beliefs concerning the nature of human existence in life and after death and the relations of the living to the dead are recorded in these customs. The mystery concerning the future love for the departed who were loved while here, reverence for the wise and good who may after death be wiser and better, hatred and fear of those who were enemies here and may have added powers of enmity in the hereafter—all these and like considerations have led in every tribe to a body of customs of exceeding interest as revealing the opinions, the philosophy of the people themselves.

In these customs, also are recorded evidences of the social condition of the people, the affection in which friends and kindred are held, the very beginnings of altruism in primitive life.

In like manner these customs constitute a record of the moral condition of the people, as in many ways they exhibit the ethic standards by which conduct in human life is judged. For such reasons the study of mortuary customs is of profound interest to the anthropologist.

It is hoped that by this method of research the observations of many men may be brought together and placed on permanent record, and that the body of material may be sufficient, by a careful comparative study, to warrant some general discussion concerning the philosophy of this department of human conduct.

General conclusions can be reached with safety only after materials from many sources have been obtained. It will not be safe for the collector to speculate much upon that which he observes. His own theory or explanation of customs will be of little worth, but the theory and explanation given by the Indians will be of the greatest value. What do the Indians do, and say, and believe? When these are before us it matters little whether our generalizations be true or false. Wiser men may come and use the facts to a truer purpose. It is proposed to make a purely objective study of the Indians, and, as far as possible, to leave the record unmarred by vain subjective speculations.

The student who is pursuing his researches in this field should carefully note all of the customs, superstitions, and opinions of the Indians relating to—

1. The care of the lifeless body prior to burial, much of which he will find elaborated into sacred ceremonies.

2. The method of burial, including the site of burial, the attitude in which the body is placed, and the manner in which it is investured. Here, also, he will find interesting and curious ceremonial observances. The superstitions and opinions of the people relating to these subjects are of importance.

3. The gifts offered to the dead; not only those placed with the body at the time of burial, but those offered at a subsequent time for the benefaction of the departed on his way to the other world, and for his use on arrival. Here, too, it is as important for us to know the ceremonies with which the gifts are made as to know the character of the gifts themselves.

4. An interesting branch of this research relates to the customs of mourning, embracing the time of mourning, the habiliments, the self- mutilations, and other penances, and the ceremonies with which these are accompanied. In all of these cases the reason assigned by the Indians for their doings, their superstitions, and explanations are of prime importance.

5. It is desirable to obtain from the Indians their explanation of human life, their theory of spirits and of the life to come.

A complete account of these customs in any tribe will necessitate the witnessing of many funeral rites, as the custom will differ at the death of different persons, depending upon age, sex, and social standing....