An Introduction to the Industrial and Social History of England 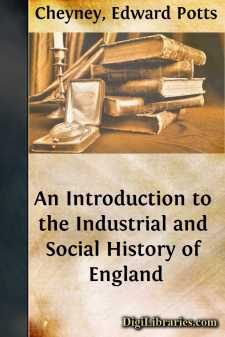 GROWTH OF THE NATION To the Middle of the Fourteenth Century

1. The Geography of England.—The British Isles lie northwest of the Continent of Europe. They are separated from it by the Channel and the North Sea, at the narrowest only twenty miles wide, and at the broadest not more than three hundred.

The greatest length of England from north to south is three hundred and sixty-five miles, and its greatest breadth some two hundred and eighty miles. Its area, with Wales, is 58,320 square miles, being somewhat more than one-quarter the size of France or of Germany, just one-half the size of Italy, and somewhat larger than either Pennsylvania or New York.

The backbone of the island is near the western coast, and consists of a body of hard granitic and volcanic rock rising into mountains of two or three thousand feet in height. These do not form one continuous chain but are in several detached groups. On the eastern flank of these mountains and underlying all the rest of the island is a series of stratified rocks. The harder portions of these strata still stand up as long ridges,—the "wolds," "wealds," "moors," and "downs" of the more eastern and south-eastern parts of England. The softer strata have been worn away into great broad valleys, furnishing the central and eastern plains or lowlands of the country.

The rivers of the south and of the far north run for the most part by short and direct courses to the sea. The rivers of the midlands are much longer and larger. As a result of the gradual sinking of the island, in recent geological periods the sea has extended some distance up the course of these rivers, making an almost unbroken series of estuaries along the whole coast.

The climate of England is milder and more equable than is indicated by the latitude, which is that of Labrador in the western hemisphere and of Prussia and central Russia on the Continent of Europe. This is due to the fact that the Gulf Stream flows around its southern and western shores, bringing warmth and a superabundance of moisture from the southern Atlantic.

These physical characteristics have been of immense influence on the destinies of England. Her position was far on the outskirts of the world as it was known to ancient and mediæval times, and England played a correspondingly inconspicuous part during those periods. In the habitable world as it has been known since the fifteenth century, on the other hand, that position is a distinctly central one, open alike to the eastern and the western hemisphere, to northern and southern lands.

Physiographic Map Of England And Wales.Engraved By Bormay & Co., N.Y.

Her situation of insularity and at the same time of proximity to the Continent laid her open to frequent invasion in early times, but after she secured a navy made her singularly safe from subjugation. It made the development of many of her institutions tardy, yet at the same time gave her the opportunity to borrow and assimilate what she would from the customs of foreign nations. Her separation by water from the Continent favored a distinct and continuous national life, while her nearness to it allowed her to participate in all the more important influences which affected the nations of central Europe....