An Introduction to the History of Western Europe 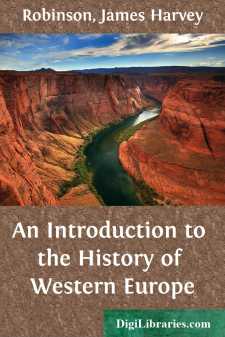 In introducing the student to the history of the development of European culture, the problem of proportion has seemed to me, throughout, the fundamental one. Consequently I have endeavored not only to state matters truly and clearly but also to bring the narrative into harmony with the most recent conceptions of the relative importance of past events and institutions. It has seemed best, in an elementary treatise upon so vast a theme, to omit the names of many personages and conflicts of secondary importance which have ordinarily found their way into our historical text-books. I have ventured also to neglect a considerable number of episodes and anecdotes which, while hallowed by assiduous repetition, appear to owe their place in our manuals rather to accident or mere tradition than to any profound meaning for the student of the subject.

The space saved by these omissions has been used for three main purposes. Institutions under which Europe has lived for centuries, above all the Church, have been discussed with a good deal more fullness than is usual in similar manuals. The life and work of a few men of indubitably first-rate importance in the various fields of human endeavor—Gregory the Great, Charlemagne, Abelard, St. Francis, Petrarch, Luther, Erasmus, Voltaire, Napoleon, Bismarck—have been treated with care proportionate to their significance for the world. Lastly, the scope of the work has been broadened so that not only the political but also the economic, intellectual, and artistic achievements of the past form an integral part of the narrative.

I have relied upon a great variety of sources belonging to the various orders in the hierarchy of historical literature; it is happily unnecessary to catalogue these. In some instances I have found other manuals, dealing with portions of my field, of value. In the earlier chapters, Emerton's admirable Introduction to the Middle Ages furnished many suggestions. For later periods, the same may be said of Henderson's careful Germany in the Middle Ages and Schwill's clear and well-proportioned History of Modern Europe. For the most recent period, I have made constant use of Andrews' scholarly Development of Modern Europe. For England, the manuals of Green and Gardiner have been used. The greater part of the work is, however, the outcome of study of a wide range of standard special treatises dealing with some short period or with a particular phase of European progress. As examples of these, I will mention only Lea's monumental contributions to our knowledge of the jurisprudence of the Church, Rashdall's History of the Universities in the Middle Ages, Richter's incomparable Annalen der Deutschen Geschichte im Mittelalter, the Histoire Générale, and the well-known works of Luchaire, Voigt, Hefele, Bezold, Janssen, Levasseur, Creighton, Pastor. In some cases, as in the opening of the Renaissance, the Lutheran Revolt, and the French Revolution, I have been able to form my opinions to some extent from first-hand material....