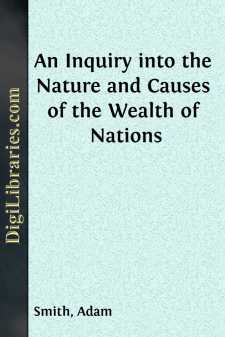 INTRODUCTION AND PLAN OF THE WORK.

The annual labour of every nation is the fund which originally supplies it with all the necessaries and conveniencies of life which it annually consumes, and which consist always either in the immediate produce of that labour, or in what is purchased with that produce from other nations.

According, therefore, as this produce, or what is purchased with it, bears a greater or smaller proportion to the number of those who are to consume it, the nation will be better or worse supplied with all the necessaries and conveniencies for which it has occasion.

But this proportion must in every nation be regulated by two different circumstances: first, by the skill, dexterity, and judgment with which its labour is generally applied; and, secondly, by the proportion between the number of those who are employed in useful labour, and that of those who are not so employed. Whatever be the soil, climate, or extent of territory of any particular nation, the abundance or scantiness of its annual supply must, in that particular situation, depend upon those two circumstances.

The abundance or scantiness of this supply, too, seems to depend more upon the former of those two circumstances than upon the latter. Among the savage nations of hunters and fishers, every individual who is able to work is more or less employed in useful labour, and endeavours to provide, as well as he can, the necessaries and conveniencies of life, for himself, and such of his family or tribe as are either too old, or too young, or too infirm, to go a-hunting and fishing. Such nations, however, are so miserably poor, that, from mere want, they are frequently reduced, or at least think themselves reduced, to the necessity sometimes of directly destroying, and sometimes of abandoning their infants, their old people, and those afflicted with lingering diseases, to perish with hunger, or to be devoured by wild beasts. Among civilized and thriving nations, on the contrary, though a great number of people do not labour at all, many of whom consume the produce of ten times, frequently of a hundred times, more labour than the greater part of those who work; yet the produce of the whole labour of the society is so great, that all are often abundantly supplied; and a workman, even of the lowest and poorest order, if he is frugal and industrious, may enjoy a greater share of the necessaries and conveniencies of life than it is possible for any savage to acquire.

The causes of this improvement in the productive powers of labour, and the order according to which its produce is naturally distributed among the different ranks and conditions of men in the society, make the subject of the first book of this Inquiry.

Whatever be the actual state of the skill, dexterity, and judgment, with which labour is applied in any nation, the abundance or scantiness of its annual supply must depend, during the continuance of that state, upon the proportion between the number of those who are annually employed in useful labour, and that of those who are not so employed....