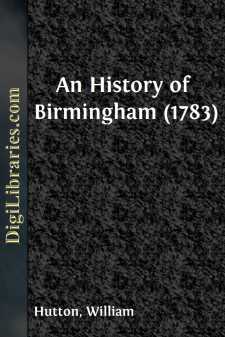 Some account of the derivation of the name of Birmingham.

The word Birmingham, is too remote for certain explanation. During the last four centuries it has been variously written Brumwycheham, Bermyngeham, Bromwycham, Burmyngham, Bermyngham, Byrmyngham, and Birmingham; nay, even so late as the seventeenth century it was written Bromicham. Dugdale supposes the name to have been given by the planter, or owner, in the time of the Saxons; but, I suppose it much older than any Saxon, date: besides, it is not so common for a man to give a name to, as to take one from, a place. A man seldom gives his name except he is the founder, as Petersburg from Peter the Great.

Towns, as well as every thing in nature, have exceedingly minute beginnings, and generally take a name from situation, or local circumstances. Would the Lord of a manor think it an honour to give his name to two or three miserable huts? But, if in a succession of ages these huts swell into opulence, they confer upon the lord an honour, a residence, and a name. The terminations of sted, ham, and hurst, are evidently Saxon, and mean the same thing, a home.

The word, in later ages reduced to a certainty, hath undergone various mutations; but the original seems to have been Bromwych; Brom perhaps, from broom a shrub, for the growth of which the soil is extremely favourable; Wych, a descent, this exactly corresponds with the declivity from the High Street to Digbeth. Two other places also in the neigbourhood bear the same name, which serves to strengthen the opinion.

This infant colony, for many centuries after the first buddings of existence, perhaps, had no other appellation than that of Bromwych. Its center, for many reasons that might be urged, was the Old Cross, and its increase, in those early ages of time must have been very small.

A series of prosperity attending it, its lord might assume its name, reside in it, and the particle ham would naturally follow. This very probably happened under the Saxon Heptarchy, and the name was no other than Bromwycham.

It lies near the centre of the kingdom, in the north-west extremity of the county of Warwick, in a kind of peninsula, the northern part of which is bounded by Handsworth, in the county of Stafford, and the southern by King's-norton, in the county of Worcester; it is also in the diocese of Lichfield and Coventry, and in the deanery of Arden.

Let us perambulate the parish from the bottom of Digbeth, thirty yards north of the bridge. We will proceed south-west up the bed of the river, with Deritend, in the parish of Aston, on our left. Before we come to the Floodgates, near Vaughton's Hole, we pass by the Longmores, a small part of King's-norton. Crossing the river Rea, we enter the vestiges of a small rivulet, yet visible, though the stream hath been turned, perhaps, a thousand years, to supply the moat. We now bear rather west, nearly in a straight line for three miles, to Shirland brook, with Edgbaston on the left....