An Essay on the Beautiful From the Greek of Plotinus 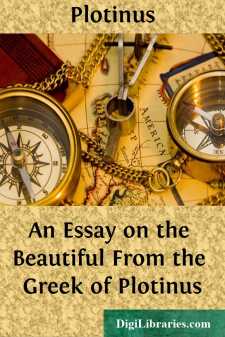 It may seem wonderful that language, which is the only method of conveying our conceptions, should, at the same time, be an hindrance to our advancement in philosophy; but the wonder ceases when we consider, that it is seldom studied as the vehicle of truth, but is too frequently esteemed for its own sake, independent of its connection with things. This observation is remarkably verified in the Greek language; which, as it is the only repository of ancient wisdom, has, unfortunately for us, been the means of concealing, in shameful obscurity, the most profound researches and the sublimest truths. That words, indeed, are not otherwise valuable than as subservient to things, must surely be acknowledged by every liberal mind, and will alone be disputed by him who has spent the prime of his life, and consumed the vigour of his understanding, in verbal criticisms and grammatical trifles. And, if this is the case, every lover of truth will only study a language for the purpose of procuring the wisdom it contains; and will doubtless wish to make his native language the vehicle of it to others. For, since all truth is eternal, its nature can never be altered by transposition, though by this means its dress may be varied, and become less elegant and refined. Perhaps even this inconvenience may be remedied by sedulous cultivation; at least, the particular inability of some, ought not to discourage the well-meant endeavours of others. Whoever reads the lives of the ancient Heroes of Philosophy, must be convinced that they studied things more than words, and that Truth alone was the ultimate object of their search; and he who wishes to emulate their glory and participate their wisdom, will study their doctrines more than their language, and value the depth of their understandings far beyond the elegance of their composition. The native charms of Truth will ever be sufficient to allure the truly philosophic mind; and he who has once discovered her retreats will surely endeavour to fix a mark by which they may be detected by others.

But, though the mischief arising from the study of words is prodigious, we must not consider it as the only cause of darkening the splendours of Truth, and obstructing the free diffusion of her light. Different manners and philosophies have equally contributed to banish the goddess from our realms, and to render our eyes offended with her celestial light. Hence we must not wonder that, being indignant at the change, and perceiving the empire of ignorance rising to unbounded dominion, she has retired from the spreading darkness, and concealed herself in the tranquil and divinely lucid regions of mind. For we need but barely survey modern pursuits to be convinced how little they are connected with wisdom. Since, to describe the nature of some particular place, the form, situation and magnitude of a certain city; to trace the windings of a river to its source, or delineate the aspect of a pleasant mountain; to calculate the fineness of the silkworm's threads, and arrange the gaudy colours of butterflies; in short, to pursue matter through its infinite divisions, and wander in its dark labyrinths, is the employment of the philosophy in vogue. But surely the energies of intellect are more worthy our concern than the operations of sense; and the science of universals, permanent and fixed, must be superior to the knowledge of particulars, fleeting and frail. Where is a sensible object to be found, which abides for a moment the same; which is not either rising to perfection, or verging to decay; which is not mixed and confused with its contrary; whose flowing nature no resistance can stop, nor any art confine? Where is the chemist who, by the most accurate analyzation can arrive at the principles of bodies; or who, though he might be so lucky in his search as to detect the atoms of Democritus, could by this means give respite to mental investigation? For every atom, since endued with figure, must consist of parts, though indissolubly cemented together; and the immediate cause of this cement must be something incorporeal or knowledge can have no stability and enquiry no end. Where, says Mr Harris, is the microscope which can discern what is smallest in nature? Where the telescope which can see at what point in the universe wisdom first began? Since, then, there is no portion of matter which may not be the subject of experiments without end, let us betake ourselves to the regions of mind, where all things are bounded in intellectual measure; where everything is permanent and beautiful, eternal and divine. Let us quit the study of particulars, for that which is general and comprehensive, and through this, learn to see and recognize whatever exists.

With a view to this desirable end, I have presented the reader with a specimen of that sublime wisdom which first arose in the colleges of the Egyptian priests, and flourished afterwards in Greece; which was there cultivated by Pythagoras, under the mysterious veil of numbers; by Plato, in the graceful dress of poetry; and was systematized by Aristotle, as far as it could be reduced into scientific order; which, after becoming in a manner extinct, shone again with its pristine splendour among the philosophers of the Alexandrian school; was learnedly illustrated with Asiatic luxuriancy of style by Proclus; was divinely explained by Iamblichus: and profoundly delivered in the writings of Plotinus....