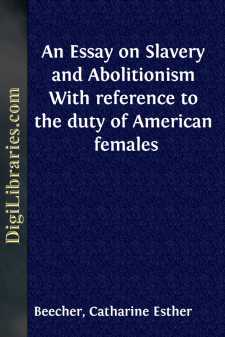 Your public address to Christian females at the South has reached me, and I have been urged to aid in circulating it at the North. I have also been informed, that you contemplate a tour, during the ensuing year, for the purpose of exerting your influence to form Abolition Societies among ladies of the non-slave-holding States.

Our acquaintance and friendship give me a claim to your private ear; but there are reasons why it seems more desirable to address you, who now stand before the public as an advocate of Abolition measures, in a more public manner.

The object I have in view, is to present some reasons why it seems unwise and inexpedient for ladies of the non-slave-holding States to unite themselves in Abolition Societies; and thus, at the same time, to exhibit the inexpediency of the course you propose to adopt.

I would first remark, that your public address leads me to infer, that you are not sufficiently informed in regard to the feelings and opinions of Christian females at the North. Your remarks seem to assume, that the principles held by Abolitionists on the subject of slavery, are peculiar to them, and are not generally adopted by those at the North who oppose their measures. In this you are not correctly informed. In the sense in which Abolitionists explain the terms they employ, there is little, if any, difference between them and most northern persons. Especially is this true of northern persons of religious principles. I know not where to look for northern Christians, who would deny that every slave-holder is bound to treat his slaves exactly as he would claim that his own children ought to be treated in similar circumstances; that the holding of our fellow men as property, or the withholding any of the rights of freedom, for mere purposes of gain, is a sin, and ought to be immediately abandoned; and that where the laws are such, that a slave-holder cannot legally emancipate his slaves, without throwing them into worse bondage, he is bound to use all his influence to alter those laws, and, in the meantime, to treat his slaves, as nearly as he can, as if they were free.

I do not suppose there is one person in a thousand, at the North, who would dissent from these principles. They would only differ in the use of terms, and call this the doctrine of gradual emancipation, while Abolitionists would call it the doctrine of immediate emancipation.

As this is the state of public opinion at the North, there is no necessity for using any influence with northern ladies, in order that they may adopt your principles on the subject of slavery; for they hold them in common with yourself, and it would seem unwise, and might prove irritating, to approach them as if they held opposite sentiments.

In regard to the duty of making efforts to bring the people of the Southern States to adopt these principles, and act on them, it is entirely another matter. On this point you would find a large majority opposed to your views. Most persons in the non-slave-holding States have considered the matter of Southern slavery, as one in which they were no more called to interfere, than in the abolition of the press-gang system in England, or the tythe system of Ireland....