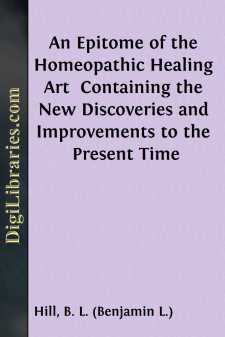 This work contains in a condensed form a very large portion of all that is practically useful in the treatment of the diseases ordinarily occurring in this country. The symptoms are given with sufficient minuteness and detail to enable any one of ordinary capacities of observation to distinguish the complaint; and the treatment is so plainly laid down, that no one need make a mistake. If strictly followed, it will, in a very large proportion of cases, effect cures, even when administered by those unacquainted with the medical sciences generally. It has been written from necessity, to meet the demands of community for a more definite work in a concise form, that should contain remedies of the most reliable character, with such directions for their use as can be followed by the traveler on his journey, or by families at home, when no physician is at hand. It might seem to some preposterous to speak of a demand for another domestic Homœopathic Practice, when half a score or more of such works are now extant, some having come out within a very short time. The demand arises, not from the want of Books, but from the defects of those that exist. There is in most of them, too little point and definiteness in the prescriptions, and a kind of vague doubting recommendation noticeable to all, which carries the impression at once to every reader, of a want of confidence by the author in his own directions.

Again, in some of the works there is too much confusion, the symptoms not being laid down with sufficient clearness to indicate the best remedy. Some of the works are unnecessarily large and cumbersome, while the real amount of valuable practical matter is comparatively meager, obliging the reader to pay for paper and binding without the contained value of his money. I do not claim entire perfection for this work, yet I do claim it to be several steps in advance of the books now extant.

This work is my own, being the result of my practical experience and observation. I have introduced several remedies that, though they are familiar to me, and have been used in my practice for many years, are, nevertheless, comparatively strange and new to most of the profession. Of some we have no extensive provings yet published, still the provings have been made, both upon the healthy and the sick. Their use, as directed in this work, is in strict accordance with their Homœopathic relation to the symptoms for which they are prescribed.

Some may object to my practice of giving several remedies in alternation or rotation and in quick succession. To such I would say, When you try this mode of practice and on comparing it with the opposite one of giving only one remedy, and that at long intervals between the doses, find my mode to be less successful than yours, then it will be time for you to make your objections. You may rely upon the vague hypotheses of the books, and give your high dilutions singly, at long intervals, and let your patients die for want of real treatment, while I will use lower dilutions and give two or more remedies in quick succession and cure mine. I only speak what is in accordance with universal observation, where the two modes are compared on equal footing, when I affirm that, while the former may effect some cures, most of the recoveries under it, are spontaneous and unaided, the latter does cure; the disease being arrested by the medicine, and the proportion of unfavorable terminations is much less under the latter than the former course....