An Enquiry Concerning the Principles of Taste, and of the Origin of our Ideas of Beauty, etc. 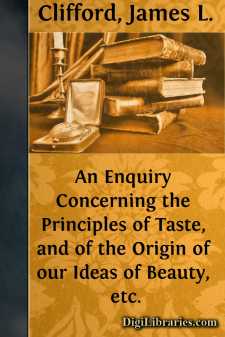 Since the early nineteenth century it has been known that Frances Reynolds, the sister of Sir Joshua, was the author of an essay on taste, which she had printed but did not publish. Yet persistent search failed to turn up a single copy. It remained one of those lost pieces which every research scholar hoped someday to discover.

In 1935 it appeared that the search was over. Among some manuscripts of Mrs. Thrale-Piozzi, long hidden in Wales, was found a printed copy of an anonymous Enquiry Concerning the Principles of Taste, and of the Origin of Our Ideas of Beauty, which seemed to be the lost essay. The date was correct; the Enquiry was dedicated to Mrs. Montagu; it contained a quotation from Dr. Johnson; and, best of all, there was attached to the pamphlet a copy (in an unidentified handwriting) of Johnson's well-known letter to Miss Reynolds concerning her essay.

Only one thing stood squarely in the way of the identification. James Northcote in his Life of Sir Joshua Reynolds, published in 1818 (II, 116-19), after describing Johnson's connection with the manuscript, gives two pages of short excerpts. Most of the quotations are general statements such as "Dress is the strong indication of the moral character" or "The fine arts comprehend all that is excellent in the moral system, and, at the same time, open every path that tends to the corruption of moral excellence." Unfortunately none of these excerpts appears directly in the Enquiry. Although some of the ideas are similar, the wording and specific details are different. By no stretch of the imagination could they be considered to come from the same piece. Thus Northcote blocked the solution of the mystery for nearly fifteen years.

Recently, however, evidence has turned up which makes the attribution a certainty. It is now obvious that Northcote must have been mistaken in the source of his quotations. Writing as he did many years after the events he was describing, Northcote either had found a copy of the first draft of Miss Reynolds' essay, or erroneously quoted from another anonymous piece which he assumed was by Miss Reynolds. In any event he was not quoting from the final version which she wished the world to see.

The story of Miss Reynolds' attempts to publish her essay can at last be pieced together from various bits of evidence, some hitherto unpublished. Just when the essay was written is uncertain. All that we know is that a preliminary version was submitted to the rigorous criticism of Dr. Johnson in 1781. Johnson, who had corrected some of her verses in red ink the year before, commented on 21 July 1781:

There is in these such force of comprehension, and such nicety of observation as Locke or Pascal might be proud of. This I say with intention to have you think that I speak my opinion.

They cannot however be printed in their present state. Many of your notions seem not very clear in your own mind, many are not sufficiently developed and expanded for the common reader; the expression almost every where wants to be made clearer and smoother....