An Enquiry Concerning the Principles of Morals 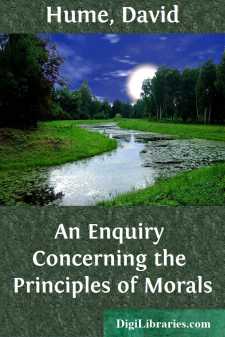 SECTION I. OF THE GENERAL PRINCIPLES OF MORALS.

DISPUTES with men, pertinaciously obstinate in their principles, are, of all others, the most irksome; except, perhaps, those with persons, entirely disingenuous, who really do not believe the opinions they defend, but engage in the controversy, from affectation, from a spirit of opposition, or from a desire of showing wit and ingenuity, superior to the rest of mankind. The same blind adherence to their own arguments is to be expected in both; the same contempt of their antagonists; and the same passionate vehemence, in inforcing sophistry and falsehood. And as reasoning is not the source, whence either disputant derives his tenets; it is in vain to expect, that any logic, which speaks not to the affections, will ever engage him to embrace sounder principles.

Those who have denied the reality of moral distinctions, may be ranked among the disingenuous disputants; nor is it conceivable, that any human creature could ever seriously believe, that all characters and actions were alike entitled to the affection and regard of everyone. The difference, which nature has placed between one man and another, is so wide, and this difference is still so much farther widened, by education, example, and habit, that, where the opposite extremes come at once under our apprehension, there is no scepticism so scrupulous, and scarce any assurance so determined, as absolutely to deny all distinction between them. Let a man's insensibility be ever so great, he must often be touched with the images of Right and Wrong; and let his prejudices be ever so obstinate, he must observe, that others are susceptible of like impressions. The only way, therefore, of converting an antagonist of this kind, is to leave him to himself. For, finding that nobody keeps up the controversy with him, it is probable he will, at last, of himself, from mere weariness, come over to the side of common sense and reason.

There has been a controversy started of late, much better worth examination, concerning the general foundation of Morals; whether they be derived from Reason, or from Sentiment; whether we attain the knowledge of them by a chain of argument and induction, or by an immediate feeling and finer internal sense; whether, like all sound judgement of truth and falsehood, they should be the same to every rational intelligent being; or whether, like the perception of beauty and deformity, they be founded entirely on the particular fabric and constitution of the human species.

The ancient philosophers, though they often affirm, that virtue is nothing but conformity to reason, yet, in general, seem to consider morals as deriving their existence from taste and sentiment. On the other hand, our modern enquirers, though they also talk much of the beauty of virtue, and deformity of vice, yet have commonly endeavoured to account for these distinctions by metaphysical reasonings, and by deductions from the most abstract principles of the understanding. Such confusion reigned in these subjects, that an opposition of the greatest consequence could prevail between one system and another, and even in the parts of almost each individual system; and yet nobody, till very lately, was ever sensible of it....