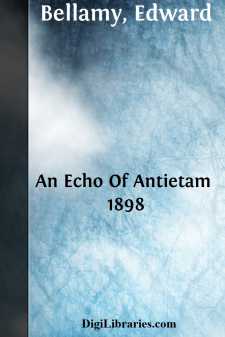 The air was tremulous with farewells. The regiment, recruited within sight of the steeples of Waterville, and for three months in camp just outside the city, was to march the next morning. A series of great battles had weakened the Federal armies, and the authorities at Washington had ordered all available men to the front.

The camp was to be broken up at an early hour, after which the regiment would march through the city to the depot to take the cars. The streets along the route of the march were already being decorated with flags and garlands. The city that afternoon was full of soldiers enjoying their last leave of absence. The liquor shops were crowded with parties of them drinking with their friends, while others in threes and fours, with locked arms, paraded the streets singing patriotic songs, sometimes in rather maudlin voices, for to-day in every saloon a soldier might enter, citizens vied for the privilege of treating him to the best in the house. No man in a blue coat was suffered to pay for anything.

For the most part, however, the men were sober enough over their leave-taking. One saw everywhere soldiers and civilians, strolling in pairs, absorbed in earnest talk. They are brothers, maybe, who have come away from the house to be alone with each other, while they talk of family affairs and exchange last charges and promises as to what is to be done if anything happens. Or perhaps they are business partners, and the one who has put the country's business before his own is giving his last counsels as to how the store or the shop shall be managed in his absence. Many of the blue-clad men have women with them, and these are the couples that the people oftenest turn to look at. The girl who has a soldier lover is the envy of her companions to-day as she walks by his side. Her proud eyes challenge all who come, saying, "See, this is my hero. I am the one he loves."

You could easily tell when it was a wife and not a sweetheart whom the soldier had with him. There was no challenge in the eyes of the wife. Young romance shed none of its glamour on the sacrifice she was making for her native land. It was only because they could not bear to sit any longer looking at each other in the house that she and her husband had come out to walk.

In the residence parts of the town family groups were gathered on shady piazzas, a blue-coated figure the centre of each. They were trying to talk cheerfully, making an effort even to laugh a little.

Now and then one of the women stole unobserved from the circle, but her bravely smiling face as she presently returned gave no inkling of the flood of tears that had eased her heart in some place apart. The young soldier himself was looking a little pale and nervous with all his affected good spirits, and it was safe to guess that he was even then thinking how often this scene would come before him afterwards, by the camp-fire and on the eve of battle.

In the village of Upton, some four or five miles out of Waterville, on a broad piazza at the side of a house on the main street, a group of four persons were seated around a tea-table.

The centre of interest of this group, as of so many others that day, was a soldier. He looked not over twenty-five, with dark blue eyes, dark hair cut close to his head, and a mustache trimmed crisply in military fashion....