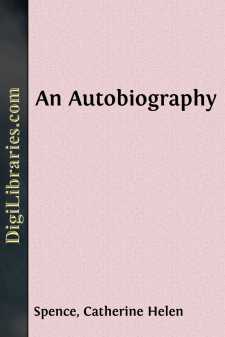 CHAPTER I. EARLY LIFE IN SCOTLAND.

Sitting down at the age of eighty-four to give an account of my life, I feel that it connects itself naturally with the growth and development of the province of South Australia, to which I came with my family in the year 1839, before it was quite three years old. But there is much truth in Wordsworth's line, "the child is father of the man," and no less is the mother of the woman; and I must go back to Scotland for the roots of my character and Ideals. I account myself well-born, for My father and my mother loved each other. I consider myself well descended, going back for many generations on both sides of intelligent and respectable people. I think I was well brought up, for my father and mother were of one mind regarding the care of the family. I count myself well educated, for the admirable woman at the head of the school which I attended from the age of four and a half till I was thirteen and a half, was a born teacher in advance of her own times. In fact. like my own dear mother, Sarah Phin was a New Woman without knowing it. The phrase was not known in the thirties.

I was born on October 31, 1825, the fifth of a family of eight born to David Spence and Helen Brodie, in the romantic village of Melrose, on the silvery Tweed, close to the three picturesque peaks of the Eildon Hills, which Michael Scott's familiar spirit split up from one mountain mass in a single night, according to the legend. It was indeed poetic ground. It was Sir Walter Scott's ground. Abbotsford was within two miles of Melrose, and one of my earliest recollections was seeing the long procession which followed his body to the family vault at Dryburgh Abbey. There was not a local note in "The Lay of the Last Minstrel" or in the novels. "The Monastery" and "The Abbot," with which I was not familiar before I entered my teens. There was not a hill or a burn or a glen that had not a song or a proverb, or a legend about it. Yarrow braes were not far off. The broom of the Cowdenknowes was still nearer, and my mother knew the words as well as the tunes of the minstrelsy of the Scottish Border. But as all readers of the life of Scott know, he was a Tory, loving the past with loyal affection, and shrinking from any change. My father, who was a lawyer (a writer as it was called), and his father who was a country practitioner, were reformers, and so it happened that they never came into personal relations with the man they admired above all men in Scotland. It was the Tory doctor who attended to his health, and the Tory writer who was consulted about his affairs.

I look back to a happy childhood. The many anxieties which reached both my parents were quite unknown to the children till the crisis in 1839. I do not know that I appreciated the beauty of the village I lived in so much with my own bodily eyes as through the songs and the literature, which were current talk. The old Abbey, with its 'prentice window, and its wonders in stonecarving, that Scott had written about and Washington Irving marvelled at—"Here lies the race of the House of Yair" as a tombstone—had a grand roll in it....