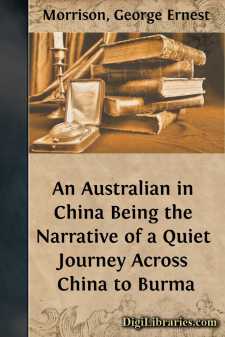 Introductory—Mainly about Missionaries and the City of Hankow.

In the first week of February, 1894, I returned to Shanghai from Japan. It was my intention to go up the Yangtse River as far as Chungking, and then, dressed as a Chinese, to cross quietly over Western China, the Chinese Shan States, and Kachin Hills to the frontier of Burma. The ensuing narrative will tell how easily and pleasantly this journey, which a few years ago would have been regarded as a formidable undertaking, can now be done.

The journey was, of course, in no sense one of exploration; it consisted simply of a voyage of 1500 miles up the Yangtse River, followed by a quiet, though extended, excursion of another 1500 miles along the great overland highway into Burma, taken by one who spoke no Chinese, who had no interpreter or companion, who was unarmed, but who trusted implicitly in the good faith of the Chinese. Anyone in the world can cross over to Burma in the way I did, provided he be willing to exercise for a certain number of weeks or months some endurance—for he will have to travel many miles on foot over a mountainous country—and much forbearance.

I went to China possessed with the strong racial antipathy to the Chinese common to my countrymen, but that feeling has long since given way to one of lively sympathy and gratitude, and I shall always look back with pleasure to this journey, during which I experienced, while traversing provinces as wide as European kingdoms, uniform kindness and hospitality, and the most charming courtesy. In my case, at least, the Chinese did not forget their precept, "deal gently with strangers from afar."

I left Shanghai on Sunday, February 11th, by the Jardine Matheson's steamer Taiwo. One kind friend, a merchant captain who had seen life in every important seaport in the world, came down, though it was past midnight, to bid me farewell. We shook hands on the wharf, and for the last time. Already he had been promised the first vacancy in Jardine Matheson's. Some time after my departure, when I was in Western China, he was appointed one of the officers of the ill-fated Kowshing, and when this unarmed transport before the declaration of war was destroyed by a Japanese gunboat, he was among the slain—struck, I believe, by a Japanese bullet while struggling for life in the water.

I travelled as a Chinese, dressed in warm Chinese winter clothing, with a pigtail attached to the inside of my hat. I could not have been more comfortable. I had a small cabin to myself. I had of course my own bedding, and by paying a Mexican dollar a day to the Chinese steward, "foreign chow," was brought me from the saloon. The traveller who cares to travel in this way, to put his pride in his pocket and a pigtail down his back, need pay only one-fourth of what it would cost him to travel as a European in European dress.

But I was, I found, unwittingly travelling under false pretences. When the smart chief officer came for my fare he charged me, I thought, too little. I expressed my surprise, and said that I thought the fare was seven dollars. "So it is," he replied "but we only charge missionaries five dollars, and I knew you were a missionary even before they told me." How different was his acuteness from that of the Chinese compradore who received me on the China Merchants' steamer Hsin Chi, in which I once made a voyage from Shanghai to Tientsin, also in Chinese dress! The conversation was short, sharp, and emphatic. The compradore looked at me searchingly. "What pidgin belong you?" he asked—meaning what is your business? Humbly I answered, "My belong Jesus Christ pidgin"; that is, I am a missionary, to which he instantly and with some scorn replied, "No dam fear!"

We called at the river ports and reached Hankow on the 14th. Hankow, the Chinese say, is the mart of eight provinces and the centre of the earth. It is the chief distributing centre of the Yangtse valley, the capital city of the centre of China. The trade in tea, its staple export, is declining rapidly, particularly since 1886. Indian opium goes no higher up the river than this point; its importation into Hankow is now insignificant, amounting to only 738 piculs (44 tons) per annum....