An Arrow in a Sunbeam and Other Tales 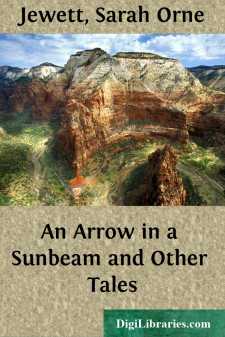 AN ARROW IN A SUNBEAM.

he minister of a fashionable church had noticed Sunday after Sunday a little old lady with a sad, patient face, dressed in very shabby mourning, sitting in the strangers' pew.

Like Job this good man could say, "The cause that I knew not, I sought out." He soon learned from the sexton her name and residence, and was surprised to find her in the very topmost room of a house, amid evidences of real poverty.

In the one little window bloomed a monthly rose and a vigorous heliotrope, and beside the pots lay half-a-dozen books, such as are rarely seen in the homes of the very poor. On the wall hung two fine engravings, and an old fashioned gold watch was suspended from a faded velvet case over the mantel piece.

Her story, when she was induced to tell it, was neither new nor startling. She had long been a widow. Her children had been called from her, till now she had but one, and he, being a cripple, could do little more than supply his own absolute wants by his work as a repairer of watches.

The pastor was charmed with her patient endurance of what others would call the hard discipline of life, and when he left her he felt that he had been a learner instead of a teacher in that poor room.

Being too delicate to allude to her apparent poverty, he said at parting, "As you are a stranger among us, I will send some of the visitors of the church to cheer and comfort you."

He selected two bright, rosy girls, full of life and happiness, of whose visits among the poor he had often heard.

They came to the widow like sunbeams through a storm. They talked cheerily, and did not appear to notice the bareness of the room. They asked something of her history, and told of their grandmothers, who also had seen much sorrow; and in this way drew her out till she told of her former competency, of her early advantages in England, and of all the misfortunes which had brought her to her present position. "And yet," she said, "I have little to complain of while I have the love and tender care of such a son as Walter."

Little by little, without a complaint from her, they found that the old lady lacked many things for her comfort. Their sympathies were aroused. It would be a delight to make her happy by gifts that would be of service to her.

Lucy Grey, a girl full of fun as well as of kindness, said, "I wish you would let me make you a bonnet; I make lovely ones. Grandma won't wear a milliner's bonnet, she likes mine so much better."

Grace Wheeler volunteered to make a dress and caps, adding, playfully, "As my dear grandma is gone, you must let me adopt you and do all I can for you. There are four of us girls always looking round for somebody to help. You can call on us for anything you want."

Four young girls, who laughingly styled themselves "The Quartette of Mercy," met at Grace Wheeler's house with materials for a dress, and a bonnet and caps. The old lady was coming two hours afterward to be fitted, having being measured before they left her house.

The girls were in a perfect gala of joy that bright afternoon....