An Architect's Note-Book in Spain principally illustrating the domestic architecture of that country. 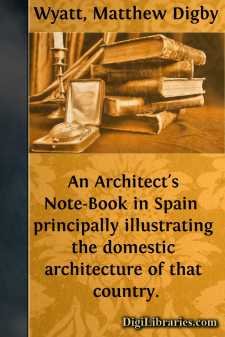 BEFORE quitting England for a first visit to Spain in the Autumn of 1869, I made up my mind both to see and draw as much of the Architectural remains of that country as the time and means at my disposal would permit; and further determined so to draw as to admit of the publication of my sketches and portions of my notes on the objects represented, in the precise form in which they might be made. I was influenced in that determination by the consciousness that almost from day to day the glorious past was being trampled out in Spain; and that whatever issue, prosperous or otherwise, the fortunes of that much distracted country might take in the future, the minor monuments of Art at least which adorned its soil, would rapidly disappear. Their disappearance would result naturally from what is called "progress" if Spain should revive; while their perishing through neglect and wilful damage, or peculation, would inevitably follow, if the ever smouldering embers of domestic revolution should burst afresh into flame. Such has been the invariable action of those fires which in all history have melted away the most refined evidences of man's intelligence, leaving behind only scanty, and often all but shapeless, relics of the richest and ripest genius.

It is difficult to realise the rapidity with which, almost under one's eyes, the Spain of history and romance "is casting its skin." Travelling even with so recent and so excellent a handbook as O'Shea's of 1869, I noted the following wanton acts of Vandalism and destruction, committed upon monuments of the greatest archæological and artistic interest since he wrote. At Seville, the Church of San Miguel, one of the oldest and finest in the city, was senselessly demolished by the populace as a sort of auto-da-fé, and by way of commemoration of the revolution of September, 1867. In exactly the same way the fine Byzantine churches of San Juan at Lerida, and of San Miguel at Barcelona, have been "improved off the face of the earth." Church plate, Custodias and Virils of the D'Arfés, Becerrias, and other Art workmen, have vanished from the treasuries of all the great ecclesiastical structures; whether sold, melted down, or only hidden, "quien sabe?" The beautiful Moorish decorations of the Alcazar at Segovia had been all but entirely destroyed by fire, attributed to the careless cigar-lighting of the Cadets to whom the structure had been abandoned. The finest old mansion in Barcelona, the Casa de Gralla, probably the masterpiece of Damian Forment, and dating from the commencement of the fourteenth century, has been pulled down by the Duke of Medina Celi to form a new street. The beautiful wooden ceiling of the Casa del Infantado at Guadalaxara, the finest of its kind in Spain, in the absence of its owner, who I was told lives in Russia, is coming down in large pieces, and once fallen, I scarcely think it will be in the power of living workmen to make it good again. The exquisite Moorish Palace of the Generalife at Granada, second only to the Alhambra and the Alcazar at Seville, is never visited by its proprietor, and is now one mass of white-wash, a victim of the zeal for cleanliness of a Sanitary "Administrador." In short to visit a Spanish city now, by the light shed upon its ancient glories by the industrious Ponz, is simply to have forced upon one's attention the most striking evidence of the "vanity of human things," and man's inherent tendency to destroy.

One of the most painful sensations the lover of the Art of the Past cannot but experience in Spain, is the feeling of its dissonance from, and irreconcileability with, the wants and economical necessities of to-day. The truth is that at the present moment, amongst the many difficult problems which surround and beset the ruling powers, one of the most puzzling is to find fitting uses for the many vast structures which have fallen into the hands of the Government. Churches in number and size out of all proportion to the wants of the population, monasteries entirely without monks, convents with scarcely any nuns, Jesuit seminaries without Jesuits, exchanges without merchants, colleges without students, tribunals of the Holy Inquisition with, thank God! no Inquisitors, and palaces without princes, are really "drugs in the market;" too beautiful to destroy, too costly to properly maintain, and for the original purposes for which they were planned and constructed at incredible outlay they stand now almost useless....