An Appeal in Favor of that Class of Americans Called Africans 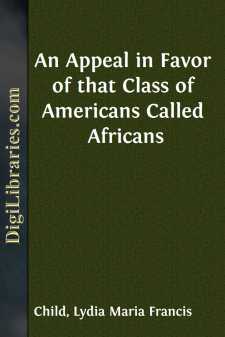 CHAPTER I. BRIEF HISTORY OF NEGRO SLAVERY.—ITS INEVITABLE EFFECT UPON ALL CONCERNED IN IT. The lot is wretched, the condition sad, Whether a pining discontent survive, And thirst for change; or habit hath subdued The soul depressed; dejected—even to love Of her dull tasks and close captivity. Wordsworth.   My ear is pained, My soul is sick with every day's report Of wrong and outrage, with which this earth is filled. There is no flesh in man's obdurate heart, It does not feel for man. Cowper.

While the Portuguese were exploring Africa, in 1442, Prince Henry ordered Anthony Gonsalez to carry back certain Moorish prisoners, whom he had seized two years before near Cape Bajador: this order was obeyed, and Gonsalez received from the Moors, in exchange for the captives, ten negroes, and a quantity of gold dust. Unluckily, this wicked speculation proved profitable, and other Portuguese were induced to embark in it.

In 1492, the West India islands were discovered by Columbus. The Spaniards, dazzled with the acquisition of a new world and eager to come into possession of their wealth, compelled the natives of Hispaniola to dig in the mines. The native Indians died rapidly, in consequence of hard work and cruel treatment; and thus a new market was opened for the negro slaves captured by the Portuguese. They were accordingly introduced as early as 1503. Those who bought and those who sold were alike prepared to trample on the rights of their fellow-beings, by that most demoralizing of all influences, the accursed love of gold.

Cardinal Ximenes, while he administered the government, before the accession of Charles the Fifth, was petitioned to allow a regular commerce in African negroes. But he rejected the proposal with promptitude and firmness, alike honorable to his head and heart. This earliest friend of the Africans, living in a comparatively unenlightened age, has peculiar claims upon our gratitude and reverence. In 1517, Charles the Fifth granted a patent for an annual supply of four thousand negroes to the Spanish islands. He probably soon became aware of the horrible and ever-increasing evils, attendant upon this traffic; for twenty-five years after he emancipated every negro in his dominions. But when he resigned his crown and retired to a monastery, the colonists resumed their shameless tyranny.

Captain Hawkins, afterward Sir John Hawkins, was the first Englishman, who disgraced himself and his country by this abominable trade. Assisted by some rich people in London, he fitted out three ships, and sailed to the African coast, where he burned and plundered the towns, and carried off three hundred of the defenceless inhabitants to Hispaniola.

Elizabeth afterwards authorized a similar adventure with one of her own vessels. "She expressed her concern lest any of the Africans should be carried off without their free consent; declaring that such a thing would be detestable, and call down the vengeance of Heaven upon the undertakers." For this reason, it has been supposed that the queen was deceived—that she imagined the negroes were transported to the Spanish colonies as voluntary laborers. But history gives us slight reasons to judge Elizabeth so favorably. It was her system always to preserve an appearance of justice and virtue. She was a shrewd, far-sighted politician; and had in perfection the clear head and cold heart calculated to form that character. Whatever she might believe of the trade at its beginning, she was too deeply read in human nature, not to foresee the inevitable consequence of placing power in the hands of avarice.

A Roman priest persuaded Louis the Thirteenth to sanction slavery for the sake of converting the negroes to Christianity; and thus this bloody iniquity, disguised with gown, hood, and rosary, entered the fair dominions of France. To be violently wrested from his home, and condemned to toil without hope, by Christians, to whom he had done no wrong, was, methinks, a very odd beginning to the poor negro's course of religious instruction!

When this evil had once begun, it, of course, gathered strength rapidly; for all the bad passions of human nature were eagerly enlisted in its cause. The British formed settlements in North America, and in the West Indies; and these were stocked with slaves. From 1680 to 1786, two million, one hundred and thirty thousand negroes were imported into the British colonies!

In almost all great evils there is some redeeming feature—some good results, even where it is not intended: pride and vanity, utterly selfish and wrong in themselves, often throw money into the hands of the poor, and thus tend to excite industry and ingenuity, while they produce comfort....