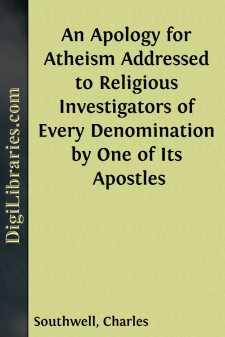 AN APOLOGY FOR ATHEISM

It would be absurd to doubt that religion has an important bearing on all the relations and conditions of life. The connexion between religions faith and political practice is, in truth, far closer than is generally thought. Public opinion has not ripened into a knowledge that religious error is the intangible but real substratum of all political injustice. Though the 'schoolmaster' has done much, there still remain and hold some away among us, many honest and energetic assertors of 'the rights of man,' who have to learn that a people in the fetters of superstition, can never achieve political freedom. Many of these reformers admit the vast, the incalculable influence of Mahommedanism on the politics of Constantinople, and yet persist in acting as if Christianity had little or nothing to do with the politics of England.

At a recent meeting of the Anti-State Church Association it was remarked, that 'throw what we would into the political cauldron, out it came in an ecclesiastical shape'. If the newspaper report may be relied on, there was much laughing among the hearers of those words, the deep meaning of which it may safely be affirmed, only a select few of them could fathom.

Hostility to state churches by no means implies a knowledge of the close and important connection between ecclesiastical and political questions. Men may appreciate the justice of voluntaryism in religion, and yet have rather cloudy conceptions with respect to the influence of opinions and things ecclesiastical on the condition of nations. They may clearly see that he who needs the priest, should disdain to saddle others with the cost of him, while blind to the fact that no people having faith in the supernatural ever failed to mix up such faith with political affairs. Even leading members of the 'Third Estate' are constantly declaring their disinclination for religious controversy, and express particular anxiety to keep their journals free of everything 'strictly theological.' Their notion is, that newspaper writers should endeavour to keep clear of so 'awful' a topic. And yet seldom does a day pass in which this self-imposed editorial rule is not violated—a fact significant as fact can be, of that connection between religion and politics the author thinks has been far too little regarded.

It is quite possible the editors of newspapers have weighty reasons for their repugnance to agitate the much vexed question of religion, but it seems they cannot help doing so. In a leading article of this day's Post, [Endnote 4:1] we are told—'The stain and reproach of Romanism in Ireland is, that it is a political system, and a wicked political system, for it regards only the exercise of power, and neglects utterly the duty of improvement.' In journals supported by Romanists, and of course devoted to the interests of their church, the very same charge is made against English Protestantism. To denounce each other's 'holy apostolic religion' may be incompatible with the taste of 'gentlemen of the press,' but certainly they do it with a brisk and hearty vehemence that inclines one to think it a 'labour of love.' What men do con amore they usually do well, and no one can deny the wonderful talent for denunciation exhibited by journalists when writing down each other's 'true Christianity.' The unsparing invective quoted above from the Post is a good specimen....