An Apache Princess A Tale of the Indian Frontier 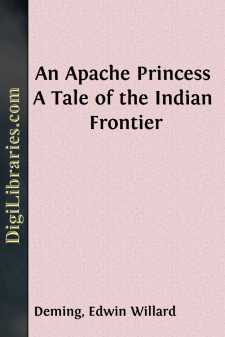 CHAPTER I THE MEETING BY THE WATERS

nder the willows at the edge of the pool a young girl sat daydreaming, though the day was nearly done. All in the valley was wrapped in shadow, though the cliffs and turrets across the stream were resplendent in a radiance of slanting sunshine. Not a cloud tempered the fierce glare of the arching heavens or softened the sharp outline of neighboring peak or distant mountain chain. Not a whisper of breeze stirred the drooping foliage along the sandy shores or ruffled the liquid mirror surface. Not a sound, save drowsy hum of beetle or soft murmur of rippling waters, among the pebbly shallows below, broke the vast silence of the scene. The snow cap, gleaming at the northern horizon, lay one hundred miles away and looked but an easy one-day march. The black upheavals of the Matitzal, barring the southward valley, stood sullen and frowning along the Verde, jealous of the westward range that threw their rugged gorges into early shade. Above and below the still and placid pool and but a few miles distant, the pine-fringed, rocky hillsides came shouldering close to the stream, but fell away, forming a deep, semicircular basin toward the west, at the hub of which stood bolt-upright a tall, snowy flagstaff, its shred of bunting hanging limp and lifeless from the peak, and in the dull, dirt-colored buildings of adobe, ranged in rigid lines about the dull brown, flat-topped mesa, a thousand yards up stream above the pool, drowsed a little band of martial exiles, stationed here to keep the peace 'twixt scattered settlers and swarthy, swarming Apaches. The fort was their soldier home; the solitary girl a soldier's daughter.

She could hardly have been eighteen. Her long, slim figure, in its clinging riding habit, betrayed, despite roundness and supple grace, a certain immaturity. Her hands and feet were long and slender. Her sun-tanned cheek and neck were soft and rounded. Her mouth was delicately chiseled and the lips were pink as the heart of a Bridesmaid rose, but, being firmly closed, told no tale of the teeth within, without a peep at which one knew not whether the beauty of the sweet young face was really made or marred. Eyes, eyebrows, lashes, and a wealth of tumbling tresses of rich golden brown were all superb, but who could tell what might be the picture when she opened those pretty, curving lips to speak or smile? Speak she did not, even to the greyhounds stretched sprawling in the warm sands at her feet. Smile she could not, for the young heart was sore troubled.

Back in the thick of the willows she had left her pony, blinking lazily and switching his long tail to rid his flanks of humming insects, but never mustering energy enough to stamp a hoof or strain a thread of his horsehair riata. Both the long, lean, sprawling hounds lolled their red, dripping tongues and panted in the sullen heat. Even the girl herself, nervous at first and switching with her dainty whip at the crumbling sands and pacing restlessly to and fro, had yielded gradually to the drooping influences of the hour and, seated on a rock, had buried her chin in the palm of her hand, and, with eyes no longer vagrant and searching, had drifted away into maiden dreamland. Full thirty minutes had she been there waiting for something, or somebody, and it, or he, had not appeared.

Yet somebody else was there and close at hand. The shadow of the westward heights had gradually risen to the crest of the rocky cliffs across the stream. A soft, prolonged call of distant trumpet summoned homeward, for the coming night, the scattered herds and herd guards of the post, and, rising with a sigh of disappointment, the girl turned toward her now impatient pony when her ear caught the sound of a smothered hand-clap, and, whirling about in swift hope and surprise, her face once more darkened at sight of an Indian girl, Apache unquestionably, crouching in the leafy covert of the opposite willows and pointing silently down stream. For a moment, without love or fear in the eyes of either, the white girl and the brown gazed at each other across the intervening water mirror and spoke no word....