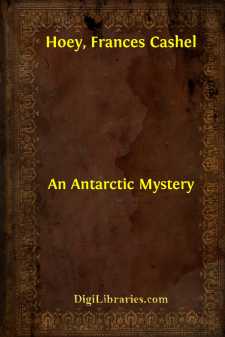 No doubt the following narrative will be received: with entire incredulity, but I think it well that the public should be put in possession of the facts narrated in вЂњAn Antarctic Mystery.вЂќ The public is free to believe them or not, at its good pleasure.

No more appropriate scene for the wonderful and terrible adventures which I am about to relate could be imagined than the Desolation Islands, so called, in 1779, by Captain Cook. I lived there for several weeks, and I can affirm, on the evidence of my own eyes and my own experience, that the famous English explorer and navigator was happily inspired when he gave the islands that significant name.

Geographical nomenclature, however, insists on the name of Kerguelen, which is generally adopted for the group which lies in 49В° 45вЂ™ south latitude, and 69В° 6вЂ™ east longitude. This is just, because in 1772, Baron Kerguelen, a Frenchman, was the first to discover those islands in the southern part of the Indian Ocean. Indeed, the commander of the squadron on that voyage believed that he had found a new continent on the limit of the Antarctic seas, but in the course of a second expedition he recognized his error. There was only an archipelago. I may be believed when I assert that Desolation Islands is the only suitable name for this group of three hundred isles or islets in the midst of the vast expanse of ocean, which is constantly disturbed by austral storms.

Nevertheless, the group is inhabited, and the number of Europeans and Americans who formed the nucleus of the Kerguelen population at the date of the 2nd of August, 1839, had been augmented for two months past by a unit in my person. Just then I was waiting for an opportunity of leaving the place, having completed the geological and mineralogical studies which had brought me to the group in general and to Christmas Harbour in particular.

Christmas Harbour belongs to the most important islet of the archipelago, one that is about half as large as Corsica. It is safe, and easy, and free of access. Your ship may ride securely at single anchor in its waters, while the bay remains free from ice.

[Illustration: The approach of the Halbrane]

The Kerguelens possess hundreds of other fjords. Their coasts are notched and ragged, especially in the parts between the north and the south-east, where little islets abound. The soil, of volcanic origin, is composed of quartz, mixed with a bluish stone. In summer it is covered with green mosses, grey lichens, various hardy plants, especially wild saxifrage. Only one edible plant grows there, a kind of cabbage, not found anywhere else, and very bitter of flavour. Great flocks of royal and other penguins people these islets, finding good lodging on their rocky and mossy surface. These stupid birds, in their yellow and white feathers, with their heads thrown back and their wings like the sleeves of a monastic habit, look, at a distance, like monks in single file walking in procession along the beach.

The islands afford refuge to numbers of sea-calves, seals, and sea-elephants....