An American Robinson Crusoe for American Boys and Girls

by Samuel B. (Samuel Buell) Allison 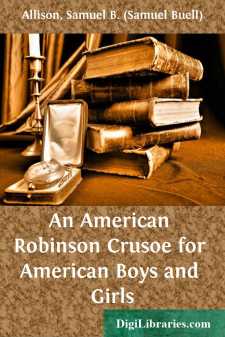 ROBINSON WITH HIS PARENTS

There once lived in the city of New York, a boy by the name of Robinson Crusoe. He had a pleasant home. His father and mother were kind to him and sent him to school. They hoped that he would study hard and grow up to be a wise and useful man, but he loved rather to run idle about the street than to go to school. He was fond of playing along the River Hudson, for he there saw the great ships come and go. They were as big as houses. He watched them load and unload their cargoes and hundreds of people get off and on. His father had told him that the ships came from far distant lands, where lived many large animals and black men. His father told him too, that in these faraway countries the nuts on the trees grew to be as large as one's head and that the tree were as high as church steeples.

When Robinson saw the ships put out to sea he would watch them till they would disappear below the horizon far out in the ocean, and think, "Oh, if I could only go with them far away to see those strange countries!" Thus he would linger along the great river and wish he might find an opportunity of making a voyage. Often it would be dark before he would get home. When he came into the house his mother would meet him and say in a gentle voice, "Why, Robinson, how late you are in getting home! You have been to the river again."

Then Robinson would hang his head and feel deeply ashamed, and when his father, who was a merchant, came home from the store, his mother would tell him that Robinson had again been truant.

This would grieve his father deeply and he would go to the boy's bedside and talk earnestly with him. "Why do you do so?" he would say. "How often have I told you to go to school every day?" This would for a time win Robinson back to school, but by the next week it had been forgotten and he would again be loitering along the river in spite of his father's remonstrances.

II ROBINSON AS AN APPRENTICE

In this way one year after another slipped by. Robinson was not more diligent. He was now almost sixteen years old and had not learned anything. Then came his birthday. In the afternoon his father called him into his room. Robinson opened the door softly. There sat his father with a sad face. He looked up and said, "Well, Robinson, all your schoolmates have long been busy trying to learn something, so that they may be able to earn their own living. Paul will be a baker, Robert a butcher, Martin is learning to be a carpenter, Herman a tailor, Otto a blacksmith, Fritz is going to high school, because he is going to be a teacher. Now, you are still doing nothing. This will not do. From this time on I wish you to think of becoming a merchant. In the morning you will go with me to the store and begin work. If you are attentive and skillful, when the time comes you can take up my business and carry it on. But if you remain careless and continue to idle about, no one will ever want you and you must starve because you will never be able to earn a living."

So the next morning Robinson went to the store and began work....