An American Idyll The Life of Carleton H. Parker 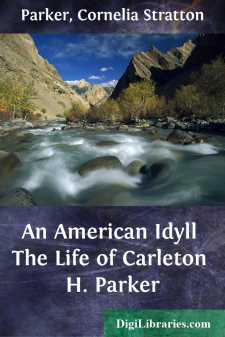 Such hosts of memories come tumbling in on me. More than fifteen years ago, on September 3, 1903, I met Carl Parker. He had just returned to college, two weeks late for the beginning of his Senior year. There was much concern among his friends, for he had gone on a two months' hunting-trip into the wilds of Idaho, and had planned to return in time for college. I met him his first afternoon in Berkeley. He was on the top of a step-ladder, helping put up an awning for our sorority dance that evening, uttering his proverbial joyous banter to any one who came along, be it the man with the cakes, the sedate house-mother, fellow awning-hangers, or the girls busying about.

Thus he was introduced to me—a Freshman of two weeks. He called down gayly, "How do you do, young lady?" Within a week we were fast friends, I looking up to him as a Freshman would to a Senior, and a Senior seven years older than herself at that. Within a month I remember deciding that, if ever I became engaged, I would tell Carl Parker before I told any one else on earth!

After about two months, he called one evening with his pictures of Idaho. Such a treat as my mountain-loving soul did have! I still have the map he drew that night, with the trails and camping-places marked. And I said, innocence itself, "I'm going to Idaho on my honeymoon!" And he said, "I'm not going to marry till I find a girl who wants to go to Idaho on her honeymoon!" Then we both laughed.

But the deciding event in his eyes was when we planned our first long walk in the Berkeley hills for a certain Saturday, November 22, and that morning it rained. One of the tenets I was brought up on by my father was that bad weather was never an excuse for postponing anything; so I took it for granted that we would start on our walk as planned.

Carl telephoned anon and said, "Of course the walk is off."

"The rain!" he answered.

"As if that makes any difference!"

At which he gasped a little and said all right, he'd be around in a minute; which he was, in his Idaho outfit, the lunch he had suggested being entirely responsible for bulging one pocket. Off we started in the rain, and such a day as we had! We climbed Grizzly Peak,—only we did not know it for the fog and rain,—and just over the summit, in the shelter of a very drippy oak tree, we sat down for lunch. A fairly sanctified expression came over Carl's face as he drew forth a rather damp and frayed-looking paper-bag—as a king might look who uncovered the chest of his most precious court jewels before a courtier deemed worthy of that honor. And before my puzzled and somewhat doubtful eyes he spread his treasure—jerked bear-meat, nothing but jerked bear-meat. I never had seen jerked anything, let alone tasted it. I was used to the conventional picnic sandwiches done up in waxed paper, plus a stuffed egg, fruit, and cake. I was ready for a lunch after the conservative pattern, and here I gazed upon a mess of most unappetizing-looking, wrinkled, shrunken, jerked bear-meat, the rain dropping down on it through the oak tree.

I would have gasped if I had not caught the look of awe and reverence on Carl's face as he gazed eagerly, and with what respect, on his offering. I merely took a hunk of what was supplied, set my teeth into it, and pulled. It was salty, very; it looked queer, tasted queer, was queer. Yet that lunch! We walked farther, sat now and then under other drippy trees, and at last decided that we must slide home, by that time soaked to the skin, and I minus the heel to one shoe.

I had just got myself out of the bath and into dry clothes when the telephone rang. It was Carl. Could he come over to the house and spend the rest of the afternoon?...