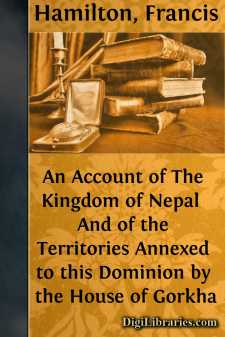 This Account, which is intended to describe the country as it stood previously to the war with the British, commencing in the end of the year 1814, is derived chiefly from the following sources.

In the first place, during the years 1802 and 1803, I passed fourteen months in the country, mostly in the vicinity of Kathmandu, the capital; and I was accompanied by Ramajai Batacharji, an intelligent Brahman, from Calcutta, whom I employed to obtain information, so far as I prudently could, without alarming a jealous government, or giving offence to the Resident, under whose authority I was acting.

In the next place, assisted by the same person, I passed two years on the frontier, collecting information, both from the Company’s subjects, and from numerous refugees and travellers from the dominions of Gorkha.  The following are the persons to whose information I am chiefly indebted:

The account of Sikim is chiefly taken from a Lama, or priest of Buddha, who, with part of his flock, had fled into the district of Puraniya, to escape from the violence of the Gorkhalese, and who constructed a map of the country, which I have deposited in the Company’s library.  Besides the Lama, I consulted many of the natives of the Company’s territory, who had visited the lower parts of Sikim, and several of the Gorkhalese, and other people of Nepal; and Mr Smith, of Nathpur, favoured me with several particulars, collected by a Mr Pagan for the information of government.

Concerning the country between Sikim and Nepal Proper, my information is chiefly derived from the following persons:

1st, Agam Singha, hereditary chief of the Kirats, a tribe bordering immediately on Nepal, and last Chautariya, or prime minister, of the princes who governed that people.

2d, A Brahman, who was the Munsuf, or civil judge of Bahadurgunj, a territory in the district of Puraniya belonging to the Company.  His ancestors were hereditary Dewans to the princes who governed the territory between Nepal and Sikim, that is, the Brahman’s family managed the princes’ revenue.

3d, From Narayan Das, a scribe, (Kayastha,) whose ancestor Janardan accompanied Lohanga, founder of the late dynasty; and whose descendants enjoyed the hereditary office of Neb, or second minister to the successors of that chief, until their final expulsion from the mountains.

4th, A slave of the Raja of Gorkha, who entered into my service in order to bring plants from the Alpine regions; but, finding him very intelligent, and a great traveller, I employed him to construct a map, which I have deposited in the Company’s library.  In order to enable himself to execute this with more care, he refreshed his memory by several journeys in different directions.

5th, A Kirat from Hedang, near the Arun river, gave me another map, which has also been deposited in the Company’s library.  It contains only the eastern parts of the territory in question.

These two maps, together with that of the Lama, as might be expected, are very rude, and differ in several points; but they coincide in a great many more, so as to give considerable authority to their general structure; and, by a careful examination of the whole, many differences, apparently considerable, may be reconciled.  The general authority of the whole is confirmed by our maps, so far as they go, and by the intelligence which Colonel Crawford obtained in Nepal.

The account of Nepal Proper is chiefly derived from my own observations, assisted by those of Ramajai above mentioned and by some communications with which I was favoured by Colonel Crawford, now Surveyor-General in Bengal.  He favoured me, in particular, with several drawings of the snowy mountains; and, by orders of the Marquis Wellesley, then Governor-General, I was furnished with copies of Colonel Crawford’s valuable geographical surveys and maps of the country.

In one point respecting these maps, I consider myself bound to do justice to the researches of Colonel Crawford.  From a treatise on the sources of the Ganges, given by H....