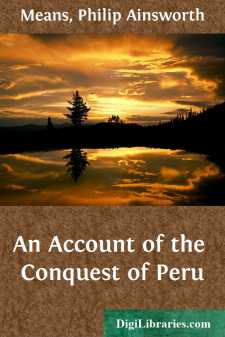 Concerning the great quantity of silver and gold which was brought from Cuzco, and of the portion thereof which was sent to H. M. the emperor as the royal fifth: How the imprisoned Cacique Atabalipa declared himself free of his promise which he had made to the Spaniards to fill a house with gold for ransom: And of the treason which the said Atabalipa meditated against the Spaniards, for which betrayal they made him die.

The Captain Hernando Pizarro had departed with the hundred thousand pesos of gold and the five thousand marks of silver which were sent to His Majesty as his royal fifth; after that event, some ten or twelve days, the two Spaniards who were bringing gold from Cuzco arrived, and part of the gold was melted at once because it was in very small pieces; it equalled the sum of ... five hundred-odd plates of gold torn from some house-walls in Cuzco; and even the smallest plates weighed four or five pounds apiece; other, larger ones, weighed ten or twelve pounds, and with plates of this sort all the walls of that temple were covered. They brought also a seat of very fine gold, worked into the form of a foot-stool, which weighed eighteen thousand pesos. Likewise, they brought a fountain all of gold and very subtilely worked which was very fair to see as much for the skill of the work as for the shape which it had been given; and there were many other pieces such as vases, jars, and plates which they also brought. All this gold gave a quantity which came to two millions and a half [pesos], which, on being refined to pure gold, came to one million, three hundred and twenty-odd thousand pesos, from which was subtracted the fifth of His Majesty, or, two hundred and seventy-odd thousand pesos. Fifty thousand marks of silver were found, of which ten thousand were set aside for H. M. One hundred and seventy thousand pesos and five thousand marks were handed over to the treasurer of H. M. The remaining hundred thousand pesos and five marks were taken, as has been said, by Hernando Pizarro to help meet the expenses which His Caesarian Majesty was encountering in the war against the Turks, enemies of our Holy Faith, as they say. All that remained, beyond the royal fifth, was divided among the soldiers and companions of the Governor. He gave to each one what he conscientiously thought he justly merited, taking into consideration the trials each man had passed through and the quality of his person, all of which he did with the greatest diligence and speed possible in order that they might set out from that place and go to the city of Xauxa.

And because there were among those soldiers some who were old and more fit for rest than for fatigues, and who in that war had fought and served much, he gave them leave to return to Spain. He procured their good will so that, on returning, these men would give fairer accounts of the greatness and wealth of that land so that a sufficient number of people would come thither to populate and advance it. For, in truth, the land being very large and very full of natives, the Spaniards who were in it then were all too few for conquering it, holding it and settling it, and, although they had already done great things in conquering it, it was owing more to the aid of God who, in every place and occasion, gave them the victory, than to any strength and means which they had for succeeding, with that further aid they were confident He would sustain them in the future....